I Wanna Hold Your “Hand”

December 12th, 2019 in Anime, General Reviews by The Droid 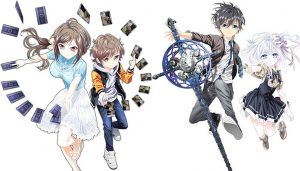 It’s the future! I’m glad you made it to Osaka in the year AD20XX. Huh? What the hell year is it? OK, it’s the future; I guess numbers don’t matter in the world of “Hand Shakers”. Let us meet Tazuna Takatsuki (him of the clockwork sword on the right). He is very adept at mechanics and helps out a ton of people with his abilities. However, he gets so mono-minded on the task at hand, he is oblivious to his surroundings and could easily get clobbered by nefarious types or locked behind in the room when the rest of the staff has gone home for the day.

A scientist as a research facility, Nagamasa Makihara, asks him by to help repair some machinery. While there, Takatsuki sees an unconscious girl on a table. Hey, what kind of research facility is this? As he nears her, she suddenly wakes up and takes him by the hand. Alakazorch! They are transported to some weird and mysterious place and it’s not Akihabara. Just as quickly, they are back in the room, where Makihara says that they cannot let go of each other’s hands or Koyori Akutagawa (the girl to his left) will die. (Note her bulldog-like grasp).

Then, they are back in this strange land, where they are attacked by another duo of hand holders, who are bent on their destruction. Our wonderful team manages to send the foes packing, as that clockwork sword manifests itself to give them a fighting chance. They secure the victory and get an explanation of sorts, which is:

They are now a group of Hand Shakers, two people that combine abilities to challenge God through holding hands, thus the name. This act also enables them to stay in the twisted reality of Ziggurat, where other Hand Shakers battle with one another and is also the very core of their Nimrod, or power. Got it? Man, why can’t this stuff ever be easy. Do you have a pocket glossary to go with this new-found power? Can it be read with one hand?

Anyway, having to hold hands ALL the time causes a ton of chagrin at school, but he eventually learns he can let go of her hand for a maximum of fifteen minutes. Need those bathroom breaks, right? The show is basically doing battles with other Hand Shakers for some caliber of power and authority. Our squad is Team Gear and they seem to have their most frenetic battles against Team Card (the other squad up there) the brother and sister duo of Lily and Masaru Hojo, who are very good.

It’s just that the series is this double life, where they are scholars, but also have to engage in these battles that appear to be endless and can manifest itself without any warning it is going to happen. And you can get thrown into a battle at any time, so you have to be ready to fight. It’s just that the fights go to be a bit silly, especially with the weapons and abilities presented and there never seems to be a way to really get the upper hand and send in a resounding defeat; more like a war of attrition.

This is one of those series that looks really good, as a lot of thought went into the backgrounds and the weaponry itself. It’s just that the plot comes off a bit thin and I have seen these ‘forced combat’ shows before, and done with a better degree of story-telling. And the ever-open ending promotes a possible second season, where I hope things can be united better than they were for this one. PS, still no hoverboards.