I Was “Maid” to Love Her

August 7th, 2020 in Anime, General Reviews by The Droid 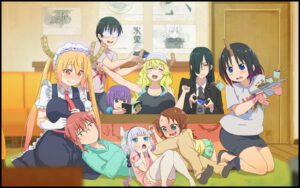 I guess I will never understand the Japanese fascination with maids. Yes, my favorite anime, “Mahoromatic”, is about one, but never anything like this kind of situation. She was merely an android; this one is, well…. Greetings are extended from “Miss Kobayashi’s Dragon Maid” (“Kobayashi-san Chi no Meidoragon”). How can you get a dragon maid? Well, it’s nice that you asked. I’ll bring out some green tea and cookies and explain it to you.

Miss Kobayashi (I assume she has a first name, but we never find out, our confused miss in the aqua hoodie to the left) is heading off to work one morning. She is some kind of computer wonk, and opens her door to see a 50-foot tall dragon staring at her. It immediately changes into the maid Tohru (holding Miss Kobayashi’s head. You can’t see it, but she does retain her massive dragon tail). Uh…..what is she doing here?

Well, the night before, Miss Kobayashi got totally tanked and wandered into the mountains, where she encountered said beastie. Beastie had fled from another world and had no place to stay. Being kind-hearted (and drunk as a skunk), Miss Kobayashi offered her tiny apartment as a place for her to stay. To repay this kindness, Tohru would become her maid, her live-in maid. The series details the wild and wacky misadventures they have, especially when all of Tohru’s friends come to visit.

Front row: Kanna Kamui (center), exiled from dragon world as well, goes to school.
Elma (far right) she is a rival of Tohru, but is also stuck here. She is a water dragon.

Back row: Quetzalcoatl (blondie) also known as Lucoa. Yup, she’s that Aztec dragon and is all the boobie jokes.
Fafnir, (black suit), the lone male dragon, he gets addicted to video games.

Back row: Makoto Takiya, (glasses) otaku that Fafnir lives with.
Shōta Magatsuchi (purple hair) who accidently called upon Lucoa and she now lives with him.

The stories contend themselves with how Tohru and Kanna try and live in this world without revealing their dragon form or their dragon nature (they are ridiculously strong). One of the on-going jokes is that Tohru tries to serve up her tail as a meal for Miss Kobayashi (it grows back!), but she’ll have no part of that. We also see the interaction between Kobayashi and her friends at work, and how this makes Tohru a bit jealous. There are no great struggles or difficulties to overcome and even when Tohru and Company get yanked back to Dragon World, the outcome was already a done deal.

This is a sweet, wonderful show, not only about friendship, but accepting the differences that allow people to be themselves. Yes, we do have the ‘I’m glad she’s gone’ show, but we know how that turns out as well.

There is also a series of really dopey OVAs that are done more to make jokes and have fun with the characters. It adds nothing to the show overall, but allows for a degree of silliness that could not have been inserted into the show and not have it stand out (much like Lucoa. Did you see what she’s packing? Don’t worry; you’ll get your beach episode).

And I would give a hearty endorsement to binge the whole series. You can always go back and drool over the more lascivious parts, but you get a better feel for the show, especially in the latter portions when the ‘drama’ starts to emerge and decisions have to be made.

And remember, it’s first run until you’ve seen it. I am your maid.