November 15th, 2022 in Anime, General Reviews by The Droid 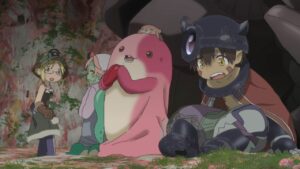 There are some absolutely brutal animes out there: “Berserk”, “Elfin Lied”, “Gantz”, “Deadman Wonderland” and “Redo of Healer”, to name a few. But the artwork supported the notion that it was going to be a bumpy ride. But what if you have an anime that is equally as brutal, but the artwork lulls you into a false notion as to what is lurking out there? Such is the case with “Made in Abyss” (“Meido in Abisu”). And after the first season and the three-movie arc, we now have the second season, with the multi-worded title “The Golden City of the Scorching Sun” (“Retsujitsu no Ougonkyou”).


Our intrepid band reaches the Sixth Layer, The Capitol of the Unreturned, where they hope to find the fabled Golden City. They find a city filled with ‘hollows’ and learn of a tale, a tale that involves long-forgotten explorers from another land and time, who also ventured into these dark and dangerous realms. The series looks at all they encounter and all that happens, as they try to eventually get to the bottom of the abyss.


This is easily the hardest show I have ever had to watch. I have to really, REALLY be in the right frame of mind to watch it, as the brutality and horrors that it inflicts can wear down the most stoic among us. We learn of these strange creatures who populate this level and their odd language, and of the monsters that must be kept at bay, as they will exterminate all which stand in their path. How can people live like this?

There is so much I want to relate about this show, but you have to experience it for yourself. YOU need to feel all that goes down, especially the side tale of the pilgrims, searching for a new life, who stumble upon the Abyss, looking for the Golden City and what fate has in store for them. It all comes together in an explosive climax that pits everyone against the seething anger and uncontrolled rage of Faputa, who somehow knows Reg.

Do NOT binge this show. I tried to couple four episodes together and it wiped me out. Even two is an effort. If you feel you can handle all that goes down, especially the wrenching humanity, you’re a better man than I am, Gunga Din. It’s all the violence and bloodshed and grotesqueries that happen that made it (for me) hard to take in. And the ending means we have at least one more season to go.