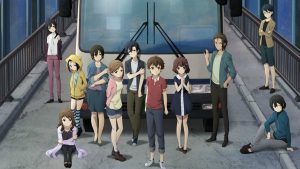 For many, a trip is a chance to get away from who you are and discover what you might be. It is also an opportunity to rid yourself of your ‘old clothes’ and try to be someone new or better or improved. Initially, that is the concept behind “The Lost Village” (“Mayoiga”), but the execution is rather complicated, as we have two competing storylines.

The first storyline is this marvelous opportunity to go on a bus tour to Nanaki Village, a shadowy location with an urban legend of it being a utopia, as well as being almost impossible to find. Many seek either to start a new life or escape the troubles of their old one. Upon arrival, they discover the village has no inhabitants, with whatever small signs of life about that are slowly deteriorating. The complete truth of Nanaki Village has yet to be discovered as well as what happened to the previous folk.

The second storyline is how this new place and new opportunity affect the 30 people who come (yes, thirty folks) for a variety of reasons, and some of the problems are not fully or completely spelled out. Either they don’t want to spell it out or they can’t spell it out. We focus the lion’s share of attention on Mitsumune (red, dead center) who is trying to escape an abusive mother and become himself and Masaki (blue dress to Mitsumune’s left), who is not as she appears and also suffers from mental duress.

The initial parts of the story content itself with getting to this village and trying to learn all its secrets, like why is it so hard to find. But there is something odd and disturbing about everything here and people appear to be losing their grip on sanity to the point that ‘reality’ is a fluid term.

Let’s say that we do delve into the supernatural here and that these folks were already distrustful of people, so when things go off the tracks, it’s almost like when the villagers go after the Frankenstein monster. There are no rules except the strong shall rule. Morality is a flexible trait and no one appears to speak honestly. This works for about two-thirds of the show. Near the end, things get a bit too unhinged and we end up doing simplistic platitudes. I also had to remind myself that this appears to occur over the course of a single evening or perhaps 12 to 15 hours of real time.

I just don’t know if it is moody enough to really generate tension or if there are going to be those questionable close calls and near-misses, so that no one is in genuine danger, just tense situations. Like shows of this genre, it is a bit slow to get started and to put the pieces into place, so you may lose interest before it really kicks in (right when the sun goes down). Plus the capacious cast makes it hard to keep all the story lines straight, so you can understand why they do what they do, even if they do not. The only thing that I can suggest is to chain episodes together, but not binge, as there is a lot going on and you could miss salient clues to view it all at once.

There is nothing wrong with a show that demands your full attention to watch it, and it is a prerequisite for this one. You have to be nimble of mind and fleet of foot to take in all that it offers, especially when thing get really weird. The only true problem I had was how the village was laid out, as I couldn’t fully grasp where this building was to that forest or where the bridge is to things. I just wish things were better constructed.

And remember, it’s first run until you’ve seen it. Are you sure we are not lost?