Let’s Start At the Very “Beginning”

September 10th, 2020 in Anime, General Reviews by The Droid 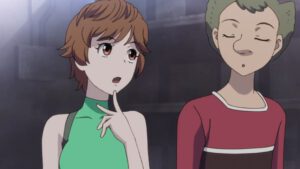 I am starting to notice another trend cropping up and that is the throwback style in anime. I have seen a few shows that are trying to mimic what I call the First Wave of Anime (1962-1969 or thereabouts), like when “Astro Boy” first made it to the shores of America. This is an apt description, as “Atom: The Beginning” (“Atomu za Biginingu”) tells the story of things before “Astro Boy” became Astro Boy.

We start off with two electronic prodigies, Umataro Tenma (black hair to the left) and Hiroshi Ochanomizu (big nose to the right). They have spent endless amounts of time researching robots, with Tenma wanting to produce a god and Ochanomizu wanting to produce a friend, eventually producing the robot A106 (that Golden Boy towards the left). The question that the duo was wondering, would A106 eventually turn into a god or a friend?

Now, this is young Tenma, the person would eventually create Astro Boy, but those days are far into the future. Hiroshi, who will eventually become the head of the Ministry of Science, is the one who rescues Astro Boy when Tenma sells him to the circus. (I happened to see this episode when I went to AX 17 for an early morning showcase of “Astro Boy”) For now, he and Hiroshi are content to try and invent a robot, but a more human robot, as it is infused with what they call Bewusstsien A.I. (although it never goes into deep details as to what it really means).

They are aided and/or abetted by Ran Ochanomizu (sailor suit with Tenma), who possesses an almost innate sense of robotics and Motoko Tsutsumi (right with Hiroshi), who is enrolled in Nerima University’s school of robotics engineering. Her brother, Moriya, is considered to be a robotics genius, but looks down on these two ‘geniuses’.

The series details all the fights and problems in trying to do more with their robot A106.

Once you get around the Old School art style (people with great big beezers or ridiculously oversized eyebrows or walrus-like mustaches, plus massively exaggerated actions and reactions), there is a real story in here. Aiding it along is the constant battles that our two geniuses have with each other and the establishment in trying to determine where and how they wish to proceed with their robot. It all comes to a stunning conclusion with a version of ‘Battlebots’. They call it ‘Robo-Wrestling’ as you have both autonomous robots and piloted robots doing battle.

We also have the vague and mysterious Dr. Lolo, overdressed and out of sync with her times. She has a robot that could easily be called “The Terminator”, owing to the sheer destructive power it possesses and we see it in action against A106.

Now, some will say that this is a mecha series, and, in a broad sense of the term, you are correct, but I felt it was trying to do more than have some guy, piloting a Gundam of some nature, while shrieking at his enemy that they will be destroyed. In this instance, it is more trash-talking than any kind of vengeance or a line in the sand. It certainly held my interest and even if you are not familiar with ‘Astro Boy’ itself, I found it worth my time to watch. OK, it may not be “A” list, but you should see it before the end of the year. Any given year of your choosing.

Oh, and even if you are familiar with “Astro Boy” in any way, this is not going to impinge upon your ability to enjoy the show. It is odd to wait 50 years to do a prequel series, though. However, owing to the fight sequences, both in the ring and outside of it, you binge away. It helps with the pacing and shows the eventual outcome in clear detail. You can pinpoint where things make their tiny turns that create bigger issues later and one could also state that the outcome in inevitable. But I leave that for you to decide.

And remember, it’s first run until you’ve seen it. We are geniuses!