Love Makes the “World” Go ‘Round

December 9th, 2021 in Anime, General Reviews by The Droid 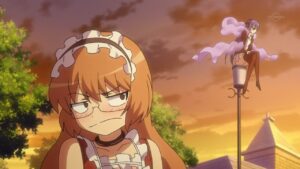 Although I would really like to watch anime with people, I tend to ruin the experience by commenting on everything I see. Also, even if I keep my big yapper shut, I can’t get people to sign up and sign in, so a lot of shows end up on the back burner, until I get a reminder of it. Such is the case for the second season of “The World God Only Knows”. (“Kami Nomi zo Shiru Sekai”, abbreviated as “Kaminomi”).

To recap, Keima Katsuragi, a second-year high school student (that’s him, dressed as a maid. Don’t ask), is an avid player of dating sim games to such an extent, he is known as the God of Conquest. However, someone in Hell did not do their homework and hooked him up with Elsie, a rather dimwitted demon girl, to gather up about 60,000 loose souls from Hell, who infest the hearts of young maidens. Katsuragi has no problems with 2D gals, but the 3D variety is a load tougher and a tougher load.

At the rate he is going to clean these souls, it would take him about 1000 years to do it by himself. But there are squads afoot. The second season contends itself with a demon rival, Haqua du Lot Herminium (that be her atop the lightpost). Although she was the top of her demon class (the same one that Elsie was in) she actually hasn’t cleansed any souls, while our little duo has done five (later, six). So, aside from having more pernicious souls to gather, there are still the general hi-jinks of Katsuragi trying to lead a ‘normal’ life.

I did enjoy the fact that things have gotten a tad harder and that what he learns in the games does not always play out in real life. What bothered me was the abject humiliation he has to absorb, both emotional and physical, in doing his job. That collar around his neck? If he fails to attain the souls or tries to renege on the contract, it will explode, killing both him AND Elsie, so there is a ton of pressure to get ‘er done. And he is chafing at the bit on this. At least with the games, you get some kind of reward at the end. With reality, it’s time to adjust your belt and go once more unto the breach, dear friends, once more. But he pursues it with dogged determination. He also dispenses one of the funniest lines I have heard in anime. You will recognize the reference immediately, but I will leave it to you to discover.

Despite the uptick in the story, I feel for Katsuragi. In the end, this will help him be a better person, but the short-haul is a real pain in the patootie. I also feel that whatever standard he held for himself is slipping away and there really is no one he can talk to about this…unless this was part of the plan for the second season. It also doesn’t feel like the Saved Soul of the Week. Each lady has their own wants and needs and Katsuragi has to be able to adapt without a safety net and really think on his feet. In any case, this is a good series to track down and I would link seasons one and two as a massive combo blast, as it plays out much better.

This is a tough one for binging. It can benefit from binging, but you may feel frustrated by seeing how badly Katsuragi is treated and mistreated. My previous comment notwithstanding, a lot depends on how well you can tolerate what’s going down.

And remember, it’s first run until you’ve seen it. How many are out there?