November 12th, 2020 in Anime, General Reviews by The Droid 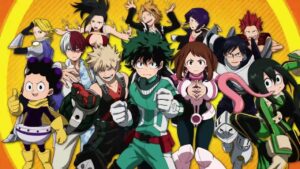 Latin is a funny language, in that it is used mostly in the scientific naming of things and in any column from George Will. There are useful phrases, but you may end up having to explain them, so it loses its punch. The phrase ‘ne plus ultra’ means ‘nothing greater beyond’, so you have reached your zenith. However, for the second season of this show, it is “My Hero Academia: Plus Ultra”.

Now, if you wish, you can take in Show 13.5, as it’s a recap, but it can be missed as well. With the survivors of the attack by the League of Villains still recovering, the school decides to hold its annual Sports Festival, where all the students trot out their quirks and battle one another. The first rounds are typical events: obstacle race and cavalry battle. Then, the Top 16 students face off against one another. It is here that we see those personalities take shape and how it might predict the kind of superhero they will become.

Once the tournament is over (and did you think I would tell you who the Big Winner was? Really?) Mr. Aizawa announces that everyone has to decide a hero name for themselves, and that since many of the students have gotten multiple offers from pro heroes groups, everyone will be doing a one-week internship at a hero agency. Izuku (Oh, Mr. Green in the middle) is still not sure which agency he should join when suddenly All Might shows up. He tells Izuku that his teacher has offered an internship, and Izuku accepts it.

Now, teachers have differing styles and approaches, so it ends up being a real workout for all of them, made worse by the arrival of Stain: The Hero Killer. This ending arc puts the show on its collision course with the League of Villains for the third season.

This show has gotten better, if you can accept that. We are now defining everyone and what they can do and how events will soon overtake them all. It’s just that the villains were really cartoony and Stain came off as not much different than Syndrome from “The Incredibles” and he had a terrifying quirk. Izuku still has a long way to go, but it’s going to work out. The one tip-off is that there are moments in his narration that he references these things and events as being in the past, so the whole series is a caliber of giant flashback for him. He might even be at the end of his hero life, and is passing on salient information to his apprentice. Only time will tell.

Binging with this series has always been at crossed purposes for me. I mean, there is certainly no reason as to why you can’t link it all together, but there is just such a lot going on and needs to be unpacked and has to be addressed that binging might work against it, but that’s a difficult decision. It’s just that I like this show quite a lot, so I am not all that anxious to get through it all at once, my main argument against binging. However, if you do find yourself at home and you don’t really care what’s happening with Wendy or Maury or Ellen, fire up the barbie, mate!

And remember, it’s first run until you’ve seen it. I am here.