March 5th, 2020 in Anime, General Reviews by The Droid 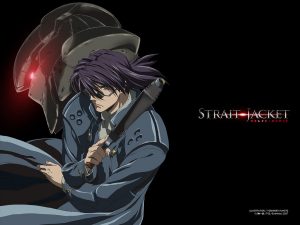 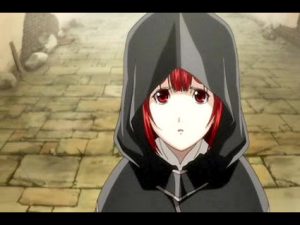 This is billed as a movie in some sectors, but it is more of a special or even an extended OVA (three episodes), although I have discussed my reluctance labeling things an OVA when it comes off as something experimental than what I feel is a true OVA. But I digress. Welcome to the world of “Strait Jacket” (“Sutoreito Jaketto”).

Although it can be seen as the world of now, it is an alternative history. In this world, magic was proven to exist, without a doubt, in 1899. And the world took to it and it took to the world, so it has permeated every facet of society and changed how the world has developed. Although the use of this magic is limited to those few who can actually wield it, there is a serious drawback in all of this: the Curse.

People who use magic too often are at risk in transforming into demons: horrific, malevolent abominations of nature that become immune to ordinary weapons. The Magic Administration Bureau, also known as the Sorcery Management Bureau, is set up in the attempt to monitor the nature of magic, regulate its use and police those who use magic illegally. And when people ‘cross over’, destroy all monsters.

They use Sorcerists, people who wear a special suit of armor that resists the negative aspects of magic and use equally specialized bullets that can terminate these hideous creatures. Although the suits are known as ‘Mold Armor’ (which is a terrible name; couldn’t they come up with something better, even “Willwear”?), it is a strait jacket, as it constrains the person into their human form (although when they put it on, their bodies becomes decorated with a variety of magical or runic markings).

Aye, that’s the rub. Not too many people can put on the last suit you’ll ever wear and you need to be licensed, forcing the MAB to sometimes use outside help, folks who are unlicensed and thus, a caliber of loose cannon. This means you have to use the ‘best’ out there and that is Leiot Steinberg (him to the left), but he causes as much destruction, if not more, than the creatures he is trying to subdue, so it always comes off as a Pyrrhic victory.

He has an assistant, Kapelteta Fernandez (her to the right), but she appears to have four eyes; the two you see and two red disk on her forehead (you might be able to make one of them out under her hood). Although she stays with Leiot, she is eventually going to kill him for some sin in the past that he inflicted upon her. This is hinted at, but never completely codified.

Adding to this volatile mix is Isaac Hammond. He was saved by a suit user and he, himself, became one. Everything Leiot isn’t, he is. And he does the job much neater and is far more personable. But he is equally tortured by things and events, and these thoughts always spill over into his job. Plus there are those post-work musings, as each enjoys the fruits of their labors, but do they really enjoy things? Are they endlessly tortured by mistakes they have made and regret having to take them? Is there a way to atone for these misdeeds? Why does the pizza delivery guy never come out here?

This story had a good basic idea, but it fell into tropes pretty fast and seemed unable to do much more with a rather compelling tale than run in place. Three episodes aren’t much more than to tell one arc and there were so many arcs that could have been explored if they wanted to do more with it. Another drawback is that this is 10 years old. It’s like clearing out your closet and you come across something that you either forgot about or never noticed. The art work is pretty good, although it is physically dark, so it is hard to see a lot that goes down. Also, much is not really explained, so many, if not most, of the relationships go unplumbed. I personally wondered if Isaac was saved by Leiot, but it’s not much more than a tantalizing clue.

And what about the larger issue of perhaps reducing the dependence on magic to prevent the ‘malediction’ (the official term for crossing over into a deformed creature). And for someone who was bent on killing Leiot, Kapel seems quite content to bide her time, so we are not aware of the depth of her fury or how she intends to dispatch him. A knife to the ribs or poisoned fish heads?

Let’s talk about the monsters for a moment. It’s just that they are grotesquely deformed, as if it has to be shown that when it goes bad, it goes very, very bad and since they have lost their humanity (and they have; the caliber of carnage is tremendous) then it is OK to blast them into Baco-Bits, even though they have grown as big as a house.

I wonder if it was intentional that everyone second-guesses themselves. No one is ever real sure as to what it is they are doing or hope to accomplish, so there is an air of impending doom or even catastrophic failure. If you really want a brooding anime (in some instances, it reminded me of “Psycho-Pass”), you may want to give this a try-out. Just don’t invest too much in it.

And remember, it’s first run until you’ve seen it. What do sinners want?