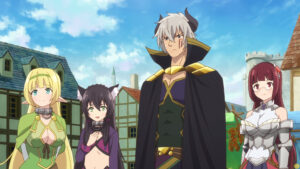 There is a special name for this kind of show: isekai. This is where the main character finds themselves transported to another land, whether it is a real land or some kind of video game land. For the most part, they are treated as comedic. Some are a bit rough (like “The Rising of the Shield Hero”), but this one, “How Not to Summon a Demon Lord” (“Isekai Maō to Shōkan Shōjo no Dorei Majutsu”, or “The Other World Demon Lord and the Summoning Girl’s Slave Magic.”) is deliciously stupid.

Takuma Sakamoto is a hikikiomori otaku NEET shut-in hermit loner. I do not think we ever see him as he really is. We only see his on-line persona, the Demon Lord Diablo. His game is Cross Reverie, and he has some amazing stats to back up his character.

He was actually summoned by those two fetching young girls to the left, the pantherian Rem (ears) and the elf Shera (boobs), who attempted to use a spell to make Takuma their servant. You should read ALL the rules before you step into the fray. Demon has a magic ring with the ability “Magic Reflection”. This means any spell rebounds, so in this case they BOTH end up with magic collars stuck on their necks, and become his servants instead.

Here’s the issue: Demon is a pansy. When you are on-line, you can talk all the smack you want and at the end of the day, the PC goes off and you go to beddy-bye time. Here, he REALLY has to play his part, so he puts on a bravura performance to act like his character while interacting with others. Owing to his high stats and vast knowledge of Cross Reverie’s lore to survive in his new environment, he travels along with Rem and Shera to look for a way to remove their slave collars while helping them with their own, personal issues that led them to summon him in the first place.

I mean, he really is a decent guy, but when he is confronted, he slips into the persona and comes off as a mean motor scooter and a bad go-getter. He is even appalled at his actions and behaviors and when he tries to be a ‘nice guy’, it comes off ever worse than when he was playing it ‘straight’. It’s just that he has the wherewithal to make good on his trash talk, which only increases his legendary status.

He wants to go home where it’s safe and comfortable and easy. He doesn’t really know how to react when Shera comes at him, with her boobs a-blazin’! He would like them to be friends and will do anything to get those collars off. But he has to be careful. If he looks like a pushover (and he really is), that means even greater problems come to his doorstep. He has never had to stew so much about anything else in his life and here he does it all the time.

He is genuinely concerned that he is going to be exposed for the fraud he is, but he manages to succeed and merely adds to his already outrageous legendary standing. How does someone get out of here? Where’s the Log Out button? Mommy!!!!!

It’s nice to see a show where the hero ain’t much better than a sandwich but has just enough on the ball to send the enemies fleeing. And when his lady slavers want some personal down time, he is in a panic. You want me to do….what??? Now, since the main point of the show was not achieved, there should be a second season, when the stakes are raised to potential maniac levels and he is still able to best them all.

Damn on a spam, you need to binge this, as you can see the pathetic weaknesses of the Demon Lord and how via sheer luck or stick-bone ignorance of his foes, he manages to elude detection. You also see the build-up of frustration and fear and how this guy is losing his ever-lovin’ mind in all of this. I didn’t sign up for THIS!

And remember, it’s first run until you’ve seen it. You want to….sleep….with….me?