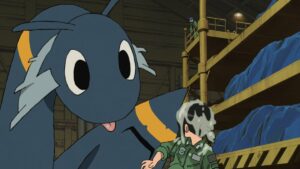 Are dragons back in vogue again? Were they ever out of vogue? Or even in “Vogue”? It’s just that I am seeing an uptick in dragon shows, or perhaps I am catching the end results of the wave. This was a show I caught on Netflix (I was able to upgrade my cable service; still no Anime Network, though. Nor hover boards) and I had a gap in the schedule, so there you go, and that is how I ended up watching “Dragon Pilot: Hisone and Masotan” (“Hisone to Masotan”).

We start off with Hisone Amakasu (that saliva-covered lass at the right). She has a variety of inter-related problems. She tends to speak her mind, as though the Gate Keeper Concept did not exist with her. This means that she says things that are not meant to be rude, but they come off as such and so she alienates herself from people. To combat this, she decides to join the Japanese Air Self-Defense Force. In this manner, she hopes to distance herself from people and just do a job. Filing seems like a marvelous career option. Perhaps even the library, if she’s lucky.

Stationed at Gifu AFB, she is doing her military duties when she enters a secret hangar, where she encounters a dragon. I mean a real-life, really huge, really real dragon. This is Masotan (but that discovery comes later). This dragon has been pining away since their last pilot left and remains hidden, as the dragon has no want or desire to ever fly again. However, he takes a huge liking to Hisone and swallows her. Now hold for a moment; do not worry.

You see, throughout history, there have always been dragons, but they have the ability to disguise themselves. In our current time, they can transform to look like military aircraft. When in disguise, Masotan looks like a Mitsubishi F-15J fighter. But there are a ton of problems that come with this ‘upgrade’, and one of them is Nao Kaizaki.

She was slated to be the pilot (who are also called D-Pies) for Masotan, but she was rejected and now feels like she is getting short shrift with the arrival of Hisone and Nao actually plots to come between them. Sorry, kid, it’s like the wands in ‘Harry Potter’; the wand chooses you, not the opposite. Ditto for dragons. The show covers two big story lines: how Hisone eventually learns to become a D-Pi and being able to perform The Ritual successfully. Nope, no previews on that one; you watch the show for the 411.

Despite some of the harder realities of the show, the artwork tends to suppress those emotions. It is rather cartoony and even when the dragons turn into aircraft, it still comes off as a bit soft. This causes some gear-grinding, when The Ritual concern comes up, as this is a huge, massive, expansive undertaking that can result in chaos and destruction should it go wrong and there is so much afoot that can cause it to go wrong.

Even with all that, there is still a lack of commitment to the series. Not goofy enough to be funny, not sober enough to be serious and when you get that split, well, it’s neither fish nor fowl. However, I would suggest that you check it out, as it is a different entry into the dragon genre and you might enjoy how this approach plays out. That also means you binge it.

I do not know if you want to run the whole nine yards on it. My vote is to split the season in half, see how they try to learn and understand themselves, their dragons and their ultimate purpose for the first half, and the second half, which is The Ritual Arc and see how that plays out.

And remember, it’s first run until you’ve seen it. I’ve got flip phones………