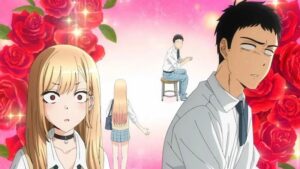 Cosplay is as ingrained into Japanese culture as is sake and pork cutlet bowls. Perhaps they feel they actually invented it, but they have certainly gone to great lengths to perfect it. It’s just that I do not personally recall a show that looks at cosplay in a mature manner; the people who do it are wholly, solely committed to it, especially in trying to pull off just the right look (which can be really hard if you take on someone like, say, Alphonse Elric) without mocking them. Thus, we have “My Dress-Up Darling” (“Sono Bisuku Dōru wa Koi o Suru”, or “That Bisque Doll Falls in Love”).

Wakana Gojo is a high school student. He lives and works with his grandfather, creating exquisite hina dolls. Owing to him being mocked and ridiculed for this dedication to the craft, he has walled himself off from everyone at school. Besides, they’re all a bunch of jerks anyway, right? In trying to make a costume for one of his dolls, the home sewing machine is on the fritz, so he takes advantage of one at the school. It is there that he encounters Marin Kitagawa, who is also in need of the sewing machine to work on her cosplay costume.

Seeing the caliber of work he does, Kitagawa eventually convinces Gojo to help her with her cosplay outfits. The series involves itself with all the flaming hoops Gojo (and Kitagawa) are put through, in order to give her a verisimilitude for her outfits.

Now, I have a passing interest in cosplay. I have done it before, but I prefer simple ones. I have neither the resources nor time to invest in all of this, so I have real respect to those who commit themselves to their passions. The show presents a lot that goes on in doing this, and one aspect of this is how Kitagawa teases Gojo with her body. I mean, he has to measure her to be able to get the proportions right and that sequence is hilarity, as he doesn’t know how or what to do in order to get the measurements without coming off as pervy. And the fact that Kitagawa strips downs to her foundations with nary a second thought just adds to his overheated fornix.

It’s also that they are both very supportive of one another. Gojo wants to make the best outfit possible, as he understands fabric. Kitagawa wants the best outfits that she can get, so she BECOMES whomsoever she is cosplaying. And when a couple of others cosplayers learn of this Genius with a Juki, all of a sudden, his life is filled with women and friendships.

This is a truly sweet show, as Gojo comes out of his cloistered world into something more interesting and satisfying. Kitagawa discovers that there is more to cosplay than merely the costume, and she develops authentic feelings for Gojo, while trying to protect him from the machinations of others. OK, it is a bit greedy and selfish, but this guy is an absolute genius in pulling off the look, right down to things like fake eyelashes and trimming wigs for that killer edge.

Binging is a problem. I mean, you CAN do it, but this is one of those shows that unfolds slowly and should be viewed as such, so you can take in the multiplicity of emotion levels that they all go through. Besides, comedy, like art, just can’t be rushed.

And remember, it’s first run until you’ve seen it. You have to measure my bust point.