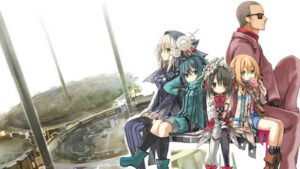 Steampunk is a term that confuses me. I mean, I think I know what it is, but I cannot always be certain of it. I bring this up, as I wonder if this is a steampunk series, or one with an unusual idea and merely looks like steampunk. This is the world of “Clockwork Planet” (“Kurokkuwāku Puranetto”).

Although you cannot tell, we are in the future (Don’t get me started on hoverboards). Sometime in the past, the Earth died. Then, a genius engineer only known as “Y” managed to revive the Earth using only gears and clockwork. Thus, the world is renamed “Clockwork Planet”, with cities being built inside the planet’s gears. In fact, you see the gears exposed and running along like gears do.

A thousand years later, Naoto Miura, a student and lover of machines living in the Kyoto gear (he is in green at our center), finds a crate has crashed through the roof of his apartment. Inside the crate is a coffin containing the broken body of an automaton. Using his superior sense of hearing, Naoto fixes the automaton, who is named RyuZU (the missy to his right), who reveals she has been broken for 206 years.

RyuZU promises complete loyalty to Naoto and the two become close. Later they meet two people trying to find RyuZU: Dr. Marie Bell Breguet, the youngest person to become a “meister” (her with the lollipop towards the right), which is a group of master engineers; and her bodyguard Vainney Halter (far right).

The last person, in white, is another automaton, part of the “Initial-Y series” and RyuZU’s “younger sister”, AnchoR. (And don’t ask about the odd spelling of the names; it doesn’t seem to affect the pronunciation of it). She was the only automaton that was manufactured as a weapon among the “Initial -Y Series”, giving her the strongest combat ability.

The series details their efforts to prevent terrorists and the military from destroying all the people in Tokyo.

First of all, this is a gorgeous-looking show. I usually rail against CG, but it is used to perfection with the clockwork portion of the planet and how these millions of gears fit together and run with nary a hiccup. It’s just that the people themselves are a bit odd. I mean, Naoto has a level of hearing that borders on frightening; Marie can wield and operate screwdrivers with near robotic perfection and at lightning speed.

You really like seeing the relationship between Naoto and RyuZU, although there is a level of perversity injected into this relationship that gets tiresome after a while. I mean, would you want to sleep with the ‘perfect’ girlfriend? (Isn’t that a Stepford Wife? Just asking.) The fight sequences are involving, but it then reflects the rather bullet-proof nature of the heroes and the inability of the enemy to defend themselves. And the ending promises a second season, as the problems afoot have not been dealt with successfully.

I just wish they would have explained this world a bit better. I am uncertain how everything fits together and why damage to one area could be trouble for another. Perhaps if it had been more fanciful or more sober or more action-oriented, it could have helped things, but it seems like they wanted to do too much over too broad of a canvas, so things get thin in spots. I would suggest you go ahead and take in this show, even if it is to only groove on the visuals.

Oh, yes indeedy doo-dah, you want to binge this show. It can easily overcome the issues that come with having to wait for the episodes to show up and you forget what happened last week and it feels like it plays out in real time. It also helps build the plotting and the actions a whole lot better. I don’t think you will get overwhelmed with a lot of the more prolix points and it could help explain some of the more arcane aspects and might reduce its episodic feel from having to wait. I mean, deadlines are always fraught with peril and uncertainty, right? Ask any reviewer.

And remember, it’s first run until you’ve seen it. There’s a gear out of place.