See You On the “Flip” Side 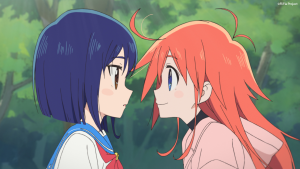 This ended up being a hot-and-cold show, as there was more going on than first revealed and, when the core aspect came through, there was a sense of betrayal. “Flip Flappers” (“Furippu Furappāzu”) is certainly a colorful and boisterous offering, but it seems to be more concerned with action rather than results, but I will explain that.

We start off with Cocona (left), a seemingly ordinary middle school student living a seemingly normal life with her seemingly ordinary grandmother. As she ponders over what the future holds for her and the career she should take up, she meets an energetic yet eccentric girl named Papika (right), who immediately takes an interest in Cocona.

Without hesitation, she drags her into an organization called Flip Flap. With the robot TT-392 (he reminded me a lot of Wall-E), they fall into a tunnel and land in a place called Pure Illusion. Well, it’s winter, but it isn’t all that cold. They are looking for treasure, when a nasty snow monster shows up and tries to dispatch them. Cocona awakens a power within her and dispatches said monster, obtaining a shard in the process.

The series looks at all these crazy and wild adventures that they go on, to obtain these shards, but also learn a lesson in both what friendship means and how to harmonize these fragments in order to sync their feelings and transform into magical girls.

One aspect of the show that is well defined is their personalities. Whereas Papika is “No fear”, Cocona could be “All fear”. Each learns from the other and tries to understand not only their real life, but their life in Pure Illusion. Well, things are never as good as they seem and they are soon beset by a rival faction. Yayaka, a member of Asclepius, is trying to take their shards for her company. Then we learn the truth about everyone and the series takes a dark turn. (“Crito, we owe a shard to Asclepius; pay it and don’t forget.”)

So, is it a Magical Girl show? For me, not in the true sense of it. Certainly not like the other Magical Girl shows I have seen, this is more like adventures and misadventures of two pals, having a good time and taking care of some quests along the way to help things become better. I also have to acknowledge the concern that this is really not a show directed towards me. It is really designed for a tween gal, who could probably relate better to the characters than an old fogy like me could. I actually related better to the robot, which, at times, seemed more human than the humans.

I also had a sense of confusion when the Darkness appeared, as I could not honestly fathom why it appeared. Sure, there are times that your friends are annoying and you need time away from them, but it’s not a deal breaker. Besides, before it gets too late, we all make nicey-nicey and….am I really giving away too much? I don’t think so.

A show like this wears its emotions on its sleeve and it was easy to predict where things were going to end up. This is an anime for the younger set or one to watch with your nieces without feeling it’s “Tokyo Mew Mew”, which sent me screaming into the night.

It’s just that it followed my 4-4-4 approach to things in anime: the first four episodes set the characters and they do a small quest, the next four episodes complicate matters and the last four episodes have the real plot show up. Although there could be a second season, I am concerned that it would be a retread of what already went down. Or perhaps that idea is another…“Pure Illusion”. Har, har, har…..maybe I AM an old fogy……get off my lawn!

And remember, it’s first run until you’ve seen it. Let’s go on an adventure!