February 20th, 2020 in Anime, General Reviews by The Droid 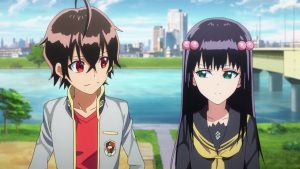 I have a problem with long-format shows and that is: when do I give the review? When I reviewed “Toriko”, I ended up giving the reviews after 52 episodes had been dispensed. I was going to do it with this show, but it closed up shop at 50, so no “Year-End Review” approach for this one. But long-format shows have another, more pressing, issue and that is being interesting throughout the run. Some shows can pull it off; others limp to the finish line and a couple I’ve seen just end without concluding and leave you hanging for either a real end or just fade into the distance. And so we are at this particular one, “Sousei no Onmyouji” (“Twin Star Exorcists”) .

Our show covers about two or three years of anime time and relates the twin tales of Rokuro Enmado (him) and Benio Adashino (her). You see, they are both exorcists and have been trained as such at a young age. In fact, Rokuro was on his way to being a pretty potent one, starting at the age of six. And what were YOU doing when you were six? (I was getting lost in a forest. Really swell.) When the series starts, he is fourteen, but is deeply traumatized, when, two years earlier, he was a survivor of the Hinatsuki Tragedy and thus swore off exorcism, as events were just too painful to bear.

Benio is also fourteen and is fiercely dedicated to exorcising these ‘kegare’, the evil forces that cause untold grief and distress. Well, a series of adventures and events put them on a collision course where they have to join forces to battles these demons. Now, if that wasn’t enough, it has been determined by the Head Exorcist that they are destined to be the parents of the “Miko”, the reincarnation of Abe no Seimei (the founder of this exorcist chapter) and the ultimate exorcist that is said to be capable of cleansing every kind of evil spirit.

Well, the butting of heads and abject refusal in all of this fuels part of the stories. We also see them (kinda) grow as both exorcists and people who deeply care for one another, but that comes with a huge amount of resistance. Much is expected of them and they seem unable to fully deliver on that request. There is also a ton of soul-searching and hand-wringing and teeth-gnashing as they are propelled into their futures. Plus, we have two extremely annoying characters underfoot and nothing can be done with either one of them.

The first is Arima Tsuchimikado, the leader of the exorcists. He comes off more like a game show host than the spiritual leader of them all. Now, his abilities are beyond reproach, but his interpersonal relationships skills are suspect beyond belief. Half the time you want to take a two-by-four or even a kendo sword and smack him a good one for being such a pain, but he makes it all work out in the end.

The other is the ‘enemy’, in the guise of Yuuto Ijika. Now, this guy was not only a big friend of Rokuro, but is Benio’s twin brother! There is no love lost between these folks, but Yuuto is just so much stronger than either of them or even both of them, that he pushed them around like scraps of paper in the wind. In fact….no, that would be telling. Let’s just say, Rokuro wants Yuuto dead, but can’t pull it off.

Amid all of this is excursions into the demon realm to dispatch these kegare, but they are endless and they have been actively fought for about 200 years with no conclusion in sight. And that’s how I felt. This truly was the ‘Never-Ending Story’.

Again, long-format shows are an effort and this one felt like it. And when a time jump in made in the middle of the show, it takes a while to figure that out. I mean, they look the same, so it is hard to see it. And when we get to about 10 or so episodes to the finish, we have a mid-course correction that alters the chemistry of the show. It just seemed that the problems had to be complicated with more problems to complicate the complicated problems we had already complicated. Complicated? To a degree.

It’s just that I never warmed up to any of the characters in this show. It was all just too much to try and take in and the exorcists came off as prats a lot of the time. Sure, they knew their stuff, but it was produced in such a method as to make you question why you asked for them in the first place. Two main questions were never answered to my satisfaction: (1) How strong are the exorcists? (2) How strong are the kegare? And a nagging doubt with me is that where do kegare come from and couldn’t you cut them off at the source? Or is that for another season? Time will tell.

I am adding a new factor to these reviews and that is ‘Bingability’. Can you sit down and watch a ton of episodes in a row? Well, you are not going to try and capture all the shows here in a marathon session, as you will die. It’s a lot to do on a vacation.

For this one, it just doesn’t hold up that well, as you need a break from all the histrionics. You might make it to six episodes (depending on the strength of will and butt), but I would do no more than four, so you can keep your balance.

And remember, it’s first run until you’ve seen it. Resonance!