April 5th, 2018 in Anime, General Reviews by The Droid 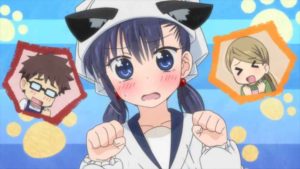 One of the problems with short-pull series is that they can be really short. I’ve seen them as short as TWO MINUTES! That’s hardly enough time for nothing! Basically, opening credits, set-up, joke, punchline, closing credits. And this series, “Ooya-san wa Shishunki!” (“Ōya-san wa Shishunki!” “The Landlord is in Puberty!”) runs those two minutes, in that order.

At its heart is a simple story idea: A young man, Maeda (left), moves into a new apartment, only to find that his new landlady, Chie Satonaka (middle), is a middle schooler. His friend, Reiko Shirai (right), comes by to visit to see how he is doing. Now, this started out life as a 4-koma and it is apparent here. And since it is brought to you by the same folks who did “Komori-san wa Kotewarenai” (and they make an appearance in one episode), you have the same kinds of soft situations. There is nothing heavy or overwhelming about any of the problems that arise. It is what I call a ‘sitcom situation’: a minor concern gets blown out of proportion, there is a lot of yelling and screaming and jumping up and down and running around in circles and then, we ‘find’ the solution and things are back to normal again. Until the next time this happens. Lather. Rinse. Repeat.

There also is not much forward progress being made. The Landlady is still just as overwhelmed by the tasks she must accomplish, the Tenant is doing his best to be a good tenant and The Friend helps to complicate matter in a friendly manner. It’s not a bad series and can easily be knocked out in an evening of watching, but it just seems too thin for the time you invest into it. I recommend these shows, as you will not get a chance to see them in the normal run of things and this one is better than most, despite being that mere 120 seconds.

And remember, it’s first run until you’ve seen it. I am your landlady!