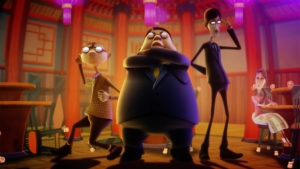 Every once in a while, you come across a show that you like, but others detest. I catch my shows on one site that rates the popularity of any particular offering and this one scored low (in the 60s), although I do not know what they were looking for. “Sushi Police” tells the tale of, fortunately enough, the Sushi Police, although it could be the Motorcycle Squad, as they are, left to right, Kawasaki, Honda and Suzuki. They are on a mission: to make sure all sushi served in the world is authentic sushi and not some kind of terrible rip-off. To this end, they will go anywhere and everywhere to protect the good name of sushi, doing anything and everything in that just and noble pursuit.

They shut down all kinds or restaurants and bars that do not live up to the proper standards of sushi, ignoring a salient fact that sushi should be open to interpretation, especially in the country that it is being made, but that is one of the underlying ideas behind the show. I will also state that it can get stupid in how these officers resolve the ‘crime’, like with a gun that shoots a wasabi paste. Oh, and Kawasaki is a robot, who can analyze the problem and the situation.

Many people might be put off by the animation style, an almost heavy-handed CG approach. It does work well with the robot, but the fan service gets a bit unusual. There are a couple of ladies that project their…concerns onto the audience and there is a caliber of ‘floating’ when they walk and even stand, so nothing comes across as really solid. Each show ends with a ‘sushi fact’, which does help plebes like me who know little about sushi (and have an even smaller desire to try it).

Now, I enjoyed this show for the rather free-wheeling approach it takes towards sushi protection, much like if the US went out to make certain people did hamburgers correctly. Owing to the brief nature, this is a show that benefits from binge watching, as we do see the characters grow and develop, learning some harsh lessons along the way. Some of the situations are really bizarre by any standards (Mexican sushi?) and potentially that ‘odd-fish’ approach may have turned some folks off, but I was drawn to it. And since they are brief episodes, you can link the whole thing together for an evening’s enjoyment. It’s just that it couldn’t stand up to being full episodes. As fun as it is, it is still a set-up, punchline approach, so in this format, it works better for all involved.

At least try out the first episode to see if you want the whole menu.

And remember, it’s first run until you’ve seen it. That is not authentic sushi!