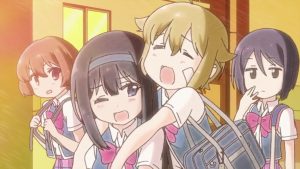 OK, lest I sound like a sour old man (“Hey, you kids, get off of my lawn!”), there is nothing wrong with all-girl animes…..to a point. It’s just that you need to have something more than moe girls or full-figured femmes or luscious ladies cluttering up the screen. I do like (wait for it)…plot. We actually started off with “Teekyu”, which began as a sports comedy manga (and the title is a pun on the Japanese word for ‘tennis’. Things like that are lost on me). They then had a spinoff, “Usakame”, which is named for the high school these four ladies attend and they belong to the tennis club.

And they are (left to right):

Not seen is Sora Shibakusa, who is the teacher advisor for the club and was on the team when she was a student at this school.

The tales revolve around their friendship and becoming better tennis players. One aspect of the show that helps and hampers is the artwork. There is a lot of limited animation, where we rely on camera tricks to give the illusion of movement, but nothing full frame. Also, the pastel, soft, light colors give an air of froth and no real bite to the show.

Now, there is nothing wrong with that. Some shows benefit from a less realistic approach to the art style and this is one of them, but there still needs to be something else going on than watching flirty girls in flirty outfits playing flirty tennis. Yeah, sure, OK, if I wanted something more ‘dramatic’ there is “Prince of Tennis”, but I am a dubious ‘fan’ of sports anime. I need more than seeing grunting, straining sweaty people being put through their paces as we endlessly dissect each and every action that they do…..and they still lose.

That all being said, there is a distinct charm about this show that could be lost if the show was expanded to a full time requirement (about 24 minutes). This needs all the anime tricks and tropes to tell its tale as best as it can, thus it works best as it is presented. As a short-pull, it can be knocked out in an evening and that approach works best for this show, as their entire life spools out with a better degree of understanding for all.

And remember, it’s first run until you’ve seen it. I’m glad to be your kouhai.