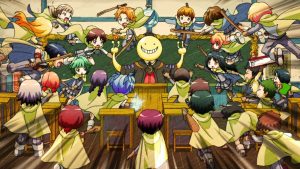 I always have a concern when you see a good anime and then someone at Corporate decides that they need to make the most of things, you know, strike while the iron is hot, and so start cranking out questionable product. “Attack on Titan” did it twice. First, for “Monster Theater”, which worked, as it was a bit of comic relief from a show that offered none and with “Attack on Titan: Junior High” which didn’t work, as it seriously undermined all of their efforts.

“Assassination Classroom” has done this with “Koro-Sensei Q” (“Koro-sensei Quest”). What we have done is chibized everyone, altered that structure of the show and cut the segments down to about 10 minutes. The main gist of the show is still there (learn to kill Koro, now referred to as The Big Bad), but we are now in a kind of mediæval approach, thus all the capes. And this is now Kunugigaoka Magic School.

The opening credits are very entertaining, as we see the entire cast turned chibi, as also see that the teachers are now a paladin and a witch. The series busies itself with teaching these tyros how to fight and overcome problems, but with a far lighter touch than the original series. Oh, they are still angling to kill Big Bad, but it is far less dramatic than the original, as it appears everyone is comic relief.

It’s just that I do not know how effective overall it is. There are some really funny segments, like “Big Bad Switcheroo” and “Bye-Bye, Big Bad”, but I wonder if it may be diluting the effectiveness of the original series. And this is a series that requires you watch the original show. I feel if you just came to it first, things might not make as much sense as it does. And the students are just as unable to achieve their quest here as they were in the original series. They battle these rather odd creatures, which I see more as a step above training dummies, but, ultimately, are no closer to doing what they have to do than before.

If you want some OK laughs and have some time to spend, this might work for you. I remain suspicious.

And remember, it’s first run until you’ve seen it. Get the Big Bad!