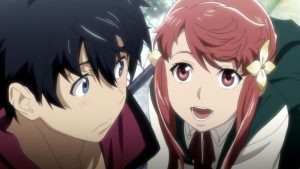 OK, I was as shocked as anyone that “Big Order” (“Biggu Ōdā”) was actually picked up as a series. Lord knows the ‘untethered one shot’ (which will now be the infamous “Episode #0”) was baffling and confusing. At least with the 10-episode run (even the extra show makes 11 and that is short-run in my book), things are fleshed out and explained a bit better, but I don’t honestly think that an extra two episodes would have helped things in the long run.

To save you the effort or rereading the previous review (I mean, I don’t mind if you want to take some time out and refresh your memory), what happened is that Eiji Hoshimiya (left) gained a power that caused the destruction of the world. Ten years have passed since the Great Destruction and Rin Kurenai (right) is seeking revenge against him for the deaths of her parents (yeah, you and everyone else, honey. The line forms to the right). He places Rin under his control after he and his sister were about to be killed by her and ordered her to be his companion. Well, more like a lookout.

He also becomes the leader of the infamous group, Dazaifu Government Organization, which seeks to create an independent country by declaring war on other countries. Eiji decides to rule this organization to create a world where his sister, Sena, would be safe. He falls for Rin at first sight and spares her life, even when she tries to assassinate him. But this does not stop her from still trying to off him. The series contends itself with how Eiji tries to accomplish his Grand Wish and not get a shiv between the rib from Rin.

The members of Dazaifu, The Group of Ten, are an interesting group of people, all with some caliber of power and a hidden agenda. They seem to ‘help’ Eiji, but at the end of the day, it is for their own mutual benefit to assist Eiji, even though there is sometimes reluctance for him to use his power. I mean, he alone understands how powerful it is. Rin runs hot and cold in how she feels about him, again stringing him along until the time is right to carve or cleave or cut up the object of her hatred.

This is one of those shows where it is very entertaining to see how things unspool, but you feel kind of cheated at the conclusion of things (well, I did. Your mileage may vary). The other thing that bothered me was that the word ‘order’ was in every episode title and if you saw it in English, both ‘order’ and ‘big’ are up there. It’s just one of those things that I find is a forced cuteness, like every episode title is the name of a rock song.

And remember, it’s first run until you’ve seen it. Time for you to die.