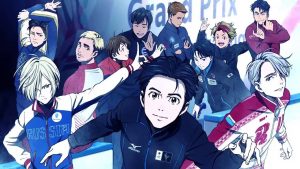 Now, this is a sports anime and I was in the middle of two other sports anime and I was really REALLY thinking of passing this one by, but the title arrested me (but I avoided a frisk-and-search), and that is “Yuri!!! On Ice” (and, yes, we need all those exclamation points as well. What is it now with exclamation points?) Now, I got pulled in, as I know what yuri means, but I had a hard time thinking is was a show about yuri types on ice. Well, they are a type of yuri type and….crap, send out the Zamboni and I’ll explain.

We open up at the Grand Prix of Skating final. Our hero and the namesake of the show, Yuri Katsuki (that guy right in the middle) comes in a very disappointing sixth place, not only suffering a crushing defeat overall, but getting clobbered by the reigning champion, Russian figure skater Victor Nikiforov (far right) by 100 points. Before Yuri leaves the arena to fly home to Japan, bereft and uncertain of his future, he is confronted by another Russian, who is double angry, and that is Yuri Plisetsky (Mr. Scowly to the left). He even goes up to Katsuki and tells him, in no uncertain terms “There can’t be two Yuris skating, so you should quit now!”

Once home, after bloating up at least 20 pounds on pork cutlet bowls, he goes to his training rink to meet his friend Yuko Nishigōri, who works for the rink. She is a childhood friend, but not a real girlfriend. Yuri then perfectly mimics an advanced skating routine performed by Victor. When secretly recorded footage of Yuri’s performance is uploaded to the internet, it catches the attention of Victor, who travels to Kyushu and offers to coach Yuri and restart his figure skating career. The story is all the troubles and tribulations that this decision generates, especially since the goal is for Yuri to win the new season’s Grand Prix of Skating.

This story is really strange. For one thing, Victor is nude a lot of the time (thank goodness for a strategically placed plant) and there is a caliber of smoldering sexuality between not only Victor and Japan Yuri, but also some sexual tension amid the other competitors. Yes, there is an idea that most (if not all) male ice skaters are gay, and this show does little to dispel that notion, especially with the flamboyant fashions they wear when doing the routines. What really works are all the troubles and problems that the competitors go through in order to be the best. And you see all of them up there in that splash panel.

For me, short of someone falling face flat on the ice, I do not know when a performance is superb and when it is standard. Plus, there is too much internalization going on with the skaters while they do their routines, as they think about their training, their personal problems, the last time they skated, what to have for dinner, did I leave the iron on and so forth. It also felt like I had to see the full routine and not just a minute or so from it.

You do this approach several times over several episodes and it makes me wonder if I can just watch an authentic competition. At least I’ll get genuine commentary as to what they are doing right and wrong and in between. Such is a problem with all sports shows, in that we have seen the rehearsals and preparation, so we need to see the payoff with the end results.

Still, it was a goodly run of things, as we observe all the things that can go wrong as easily as it can go right. A personal problem is that I guessed the ending and that is a bit of a bother, but it was still intriguing enough with the background stories and what people desired and how they tried to throw the other competitors off their game to stick it out.

The execution of the skating sequences was stunning, but it made me wonder if they were using a caliber of rotoscoping, as it seemed too precise for mere free-hand animation. And speaking of animation, I want to recommend the opening credits. I am usually not a fan of those, as I want to get into the story, but it is drawn and executed with amazing grace and subtlety that it is worth watching to see the love of skating that they all bring to the ice.

And remember, it’s first run until you’ve seen it. Nailed it!