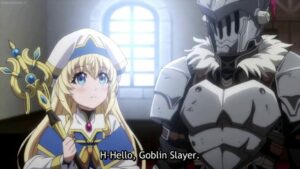 I knew this series was going to cause trouble, but I didn’t realize how controversial it would become, especially in the depiction of all the violence that befalls practically everyone in this series. Also, the caliber of it as well was unsettling to many, so it was just a large plate for all. This is “Goblin Slayer” (“Goburin Sureiyā”).

In our land of fantasy and adventure, people from far and wide come in to join the Guild. The Guild acts as a kind of clearinghouse/job board for these questers, to take on a variety of tasks, with a variety of dangers, in order to make the land safe. We follow one party, of which 15-year-old Priestess is part of (no one in this show has a real name; they are called by their profession).

Sadly, the leader of the party know little about caves and less about goblins and even nothing about questing, so the party is brutally destroyed. Priestess is saved by the arrival of Goblin Slayer, who proceeds to slaughter, eradicate, skewer, impale, eviscerate, cleave, disembowel and set aflame the goblins. If there was a nearby window, there would be defenestrating to boot.

Taken back to the Guild, Priestess realizes she needs to level up in a big hurry if she wishes to survive. She wonders if Goblin Slayer will take her on as a party member, but he works alone. He only lives for one reason: to kill each and every last goblin. He cares not for dragons or minotaurs or wild boars or zombies, regardless of how great the reward. Point him towards goblins, and he’s a happy camper. One, ten, one hundred, most of Des Moines, he will slay them all. The series follows the two of them, as they form an adventure party, to destroy all goblins.

The controversy about the show regards the depiction of the violence. I mean, goblins are killed right and left, hacked in two or a pike through their skulls, rivers of blood drenching all about. You know, something nice like that. It’s when the goblins gain the upper hand that it gets dicey. It’s not enough that the male adventures are slain, the women are raped. It’s not fully graphic, but you know that a dozen goblins will have their way with her and then decide whether she will be a sex slave or just be killed like the rest of them.

Personally, if you saw “Elfin Lied”, this series isn’t any worse that what you saw there, but I guess people were not fully prepared for it and the rating may not have been enough of a heads-up to warn you regarding the carnage. Does it hurt the show? Only towards the end, when the goblins are dispatched as though they were on an assembly line. And the conclusion points towards another season.

It’s just that the last quest is scary, as it appears that perhaps there is an evil mind directing the goblins. Usually, goblins are rather possessed of a mob mentality and think not as to how they will handle things or approach a battle. They hope stealth and surprise, along with sheer numbers, will carry the day and are therefore woefully under-prepared when they come up against thinkers and strategists.

The one thing that these questers learn is this: you can’t do it alone. Seriously, you needed to be told that? Let’s get smart on this, folks. That’s why it is called a raiding PARTY. Not that you are there for a good time (depending on what you call fun), but that there is a grouping of people that will help. I mean, two attackers, one or two defenders, a healer, a mage of some ilk or caliber, maybe more for a numbers advantage, right? This way, you have full balance and can clobber even the meanest and biggest Final Boss. Crap, I’ve played enough of these games to know about the team or party or squad or posse or whatever term you can use in all of this, to stress that more is better.

Still, the stories are fraught with peril, as even the best team can get blindsided and need to always have a few back-up plans, lest we see you as a rug in front of the fireplace. And that does not look good on a resume. We really do not learn much about Goblin Slayer and we are teased as to what he looks like (akin to Wilson from the old “Home Improvement” show), but that might be a reveal for next season, as we still have not killed enough goblins for anyone’s satisfaction.

Binging depends on how well you can tolerate the carnage, although it’s your level of acceptance. I recall a quote attributed to Groucho Marx: “I love my cigar, too, but I take it out of my mouth once in a while.” Sage advice, indeed.

And remember, it’s first run until you’ve seen it. I want to kill goblins.