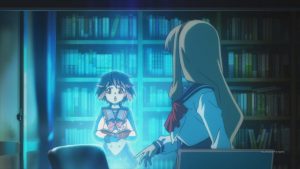 Sniff, sniff. That smell. Can’t you smell that smell? The smell is all around you. Yes, it smells like….and E/I show! Quick, lock the doors, as no one gets out of here.

One of the reasons I am not a big fan of Educational/Informational shows is that they tend to suck the life out of their efforts, so not only isn’t it all that educational and informational, it’s not even all that entertaining. “Time Travel Girl” or, if we go by the full and complete title, “Time Travel Girl: Mari, Waka, and the Eight Scientists” (“Taimu Toraberu Shōjo: Mari Waka to Hachi-nin no Kagakusha-tachi”) wants to be something more, but ends up falling short, by buying into tropes and traps of its own doing. But, on to the plot:

Mari Hayase (that glowing number) is a school girl, whose father, Eiji, disappeared three years ago, leaving behind a pendant known as the armillary compass. One day, after coming across a peculiar book about various scientists throughout history (that self-same book she is holding), the armillary compass glows, sending Mari back in time. Mari, supported by her best friend Waka Mizuki (that stunned maiden up there) and her brother Shun, travels all across time in search of her father, meeting the famous scientists who changed the way people think about electricity.

OK, so far-ish, so good-ish. There is a double concern here. The first is WHY we are visiting all of these specific great scientists and inventors (and if you want to know who the eight are, in order of appearance, they are William Gilbert, Benjamin Franklin, Alessandro Volta, Michael Faraday, Samuel F B Morse, Alexander Graham Bell, Heinrich Hertz and Thomas Alva Edison.) The second is WHY are all the guys so hunkaliscious? I mean, we present these guys as real hotties and you could certainly generate some electricity with them (Hyuk, hyuk!)

On the one hand, you learn about their specific contribution to the science around electricity and it is a good learning experience, but, on the other hand, we have the subplot that dogs it. It seems that the evil businessman (and isn’t that redundant?) Jo Mikage, is interested in the timeslip machine, researching about the “transporter matter”, which the energy source used in the laboratory to power this device. He sees it as a means to an end to further his own financial and political power and will do anything to obtain it, even destroying himself and others in the process.

Although each individual episode is interesting and intriguing, I feel that Mr. Peabody and Sherman did a better job of this with their WABAC Machine. The other thing is that you are absolutely shocked as to how under-educated Hayase is. You may not know all the details, but the names should mean some degree of something and not just to be stunned and amazed. Also, there is no telling how much actual time she gets to spend there. I could be an afternoon; it might be a few days. But when it’s time to go, she glows and goes. Just. That. Easy.

And I’m not even going to talk about any time-meeting conundrums. I think they abound, but since I am not a physics theorist, I can’t explain any of it, except that it feels off in when she lands at that particular juncture. This might be a good introduction to anime for someone a tad younger, but for the rest of us, I feel that there is a disconnect somewhere.