January 14th, 2021 in Anime, General Reviews by The Droid 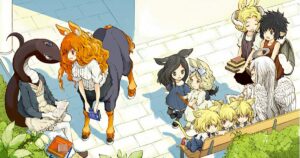 This was heavily promoted at AX 17, but I could never find any episodes scheduled for viewing while I was there, so I had to wait for the Fall Release to grab it. It is, at its heart, a school rom-com, but the situation and circumstances puts the spin on it. Welcome to “Sentōru no Nayami” (“A Centaur’s Life”, also known as “A Centaur’s Worries”).

It’s just that there are a ton of rules and regulations regarding the treatment of others. For example, you could not ride on Himeno’s back. You also cannot cut an angel’s halo (it’s more like hair and it will grow back, but it is deemed a caliber of hate crime). And facilities have to be accommodating for everyone. I mean, a centaur takes up a ton of space and what does that toilet look like. However, we can make fun of the snake people. (There is a terrible horror movie they all watch, where the snake people are the monsters.)

We spend about a year in Himeno’s life, as she makes friends and tries to navigate the dark and convoluted waters of her teen-age years, heading towards adulthood, attempting to understand her place in this world. It’s that once you get beyond the exotic nature of the people involved, it’s just a bunch of teen-aged girls having teen-aged girl problems. The fact that Himeno is a centaur is the least of her problems and, after one really twisted episode, it doesn’t play into the overall aspect of things of garnering a better understanding of life.

It’s that other shows about ‘monsters’ (like “Interviews with Monster Girls” and “Monster Musume”) are done a lot better with fewer characters and possible less overhead. It is a cute show, don’t get me wrong, but I needed something with a tad more bite to it, since you went to such great length to populate your world as such.

I know I say that school animes should be binged, but this is a horse (centaur?) of a different color. We are treated to such a realm of exotic creatures (to our sensibilities), it might not be in your best interest to speed through it. You could; it can easily stand up to all the rigors it is put through, but you may want to immerse yourself in how another half lives and see that, at our roots, we are all basically the same (does this outfit make my butt look fat?)

And remember, it’s first run until you’ve seen it. What do you mean?