October 8th, 2020 in Anime, General Reviews by The Droid 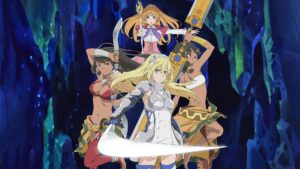 This was a second season approach that I did not see coming, but it was fully welcomed, as it is something that is rarely put out there and that is what I call ‘The Other Story’. If you remember the first season of the capaciously-titled “Is It Wrong to Try to Pick Up Girls in a Dungeon?” (“Danjon ni Deai o Motomeru no wa Machigatteiru Darō ka”), the second season is subtitled “Sword Oratoria” and it looks at the simultaneous events revolving around Aiz Wallenstein (that missy in the center with that sword a-pointing at your giblets) and the adventures she goes on with Familia Loki.

Yes, you do see the cross-over, when Aiz and Bell Cranel meet, plus all the behind-the-back talk from the rest of the people in her party. Some of them are up there, but it’s a huge family. At nine and three o’clock are Amazon sisters Tione and Tiona Hiryute. How can you tell them apart? I made an easy test: the last letter of their first name is their cup size! (oink, oink!) But don’t mock them too much; they are quite skilled with the blade and will slit you up a treat! They are both Level 5s (Aiz is a 6), so they have earned their battle ribbons.

Atop them is Lefiya Viridis, a Level 3 mage, but she lacks confidence, so she tends to fold up like a cheap card table when the going gets tough. She’s got the ability, but not the courage. Other members of the party include Finne, the head of the family; the beastman Bete Loga, and Riveria Ljos Alf, a high elf sorceress. Together, the go out on grand and dangerous quests, plumbing the lowest levels of the tower dungeon, where myths and legends abound and few have come back, whether in one piece or at all.

Aside from learning more about this dungeon, we are now made privy to a lot of the back stories of these people and how they gravitated to this particular familia. They are times you wonder how they survived, with all the back-biting and ‘touch-last’ games they play. We see how they approach mastery of the dungeon, especially when the first season was a struggle for Bell, plus all the doubts and uncertainties that plague them.

The season ends with a grand and glorious quest, one of those adventures where there will be blood and it is possibly yours. It also makes you question why you would want to go into this profession. Perhaps a barista job or even something at the local blacksmith shop might be better suited for your clothes. And the ending points towards a potential third-season, series concluder, where all of these divergent strings are woven into a masterpiece garment. Or some cheap knock-off at the discount store.

Still, I did enjoy the different point of view, as it works better than trying to encapsulate this in a filler episode that just doesn’t give enough information. Let’s see what happens next, like maybe season 3? Also, with an adventure story of this nature, you can easily binge, very easily. Especially with the dungeon arcs, the action is unrelenting and you get a better sense as to how things play out. Now, if you can watch this and decide where you can leap over or exclude the credits, that speeds things up even better…..unless it’s bathroom break time.

And remember, it’s first run until you’ve seen it. We can do this.