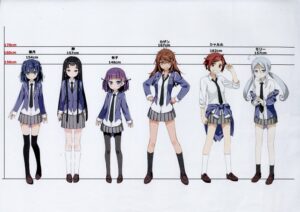 It is always nice to know that what you personally thought about a show, everyone else personally thought about the show and you aren’t going crazy, at least on that aspect of it. I bring all this up as this turned out to be one of the most frustrating show for me since “Jungre de Ikou” and that was a goodly amount of years ago. We are talking about Märchen Mädchen”,, (“Meruhen Medohen”, “Fairy Tale Girls“).

Initially, it’s another one of those “Girls Who Save the World” shows that have absolutely glutted the market. Even “Cardcaptor Sakura” falls into that category; it’s just it is kind of only her doing this, right? Not like the population of Lower Volta is helping things along.

So, we start off with Hazuki Kagimura (purple middle), who is having a hard time navigating high school, as she feels out of place and just can’t fit in well, so she retreats into her books and stories, especially those of derring-do. She must have already checked out every book from the local library by now. Twice. One day, she finds a book which she doesn’t recall borrowing. I mean, she borrows a ton at a time, so she could be forgiven not recalling it, but…She later bumps into a strange, hooded woman who Hazuki recognizes as the mage from her stories.

While following the woman back to the library to return her belongings, she finds her opening a portal into another world, in which Hazuki gets sucked into. Man, I hate those undisclosed interdimensional doors! Waking up, she finds herself in a school, unfamiliar to her. It doesn’t even look like anything she has been to at all.

The hooded woman reveals herself to be Shizuka Tsuchimikado (to Hazuki’s right), who tells Hazuki that she is in a magic school, where girls, known as ‘madchen’, are chosen by magical texts from which the world’s stories are born. She also tells Hazuki that she herself has been chosen by the book of Cinderella, and has now become a madchen. In order to master her new abilities and become a full-fledged mage, Hazuki must endure grueling tests and get used to the campus. So, her new school life, filled with fantasy and magic, begins.

The initial problem is that she is not really getting the help and education she needs to succeed and she makes a lot of rookie mistakes, all which is harshly brought up by everyone else. Sure, you’ll clobber her when she falls, but helping her not to fall? That’s someone else’s job. Even Hazuki is aware of her shortcomings, so she tries even harder and fails even bigger, to the point that she is going to be asked to leave the group. Oh, and the standard memory wipe, right?

And then….and then….and then….crickets. I mean, for the longest time, I was waiting for the last two episodes to make the scene and close out the series. We had gotten to the point in the story where I expected that some crisis would arise and she equally arises to the challenge and the girls, as a unified force, dispatch said intractable foe. Then it’s tea and crumpets all around, until the next time we are called upon to defend our world. Right? That’s is usually how the closing arc goes.

When it became apparent that I hadn’t seen anything in a long time, and that did take a long time to discover, I began to puzzle things out. Hey, I watch a ton of shows and I sometimes neglect to note where I am on any particular series. That’s on me. Anyway, I did an internet search….to discover things went south, big time! They went bust.

Episodes Nine and Ten were delayed, owing to ‘artistic quality’, although they were eventually aired. Then, more nothing. It was initially assumed that Episodes Eleven and Twelve were taken in for ‘cleaning’, but that time stretched into a full year, with rumors flying right and left. The biggest one was that the last two episodes would be available only on the full series release to DVD, then that there would be some big TV special to showcase the ‘lost’ episodes. Then, more and more nothing.

As far as I know, this series has not concluded and with conflicting tales, I am not certain what to believe any more. Here’s the real problem: it’s much ado about nothing. Lots of nothing.

As previously noted, I have seen the style and approach to teaching the tyro in a mountain of other shows of this nature. Let me count some of the ways: “Release the Spyce”, “Battle Girl High School”, “Ange Vierge” and “Kuromukuro”. It’s just I have never had a studio collapse and take everything with it. Normally, I like closure, but so much time has passed, I really don’t care how it turns out. They can get eaten by wolverines, for all it’s worth.

So, even if by some miracle, it gets it full due, I would stay away. Not all magical girl shows work. This is one of them. MULLIGAN!

And remember, it’s first run until you’ve seen it. It’s time for you to go.