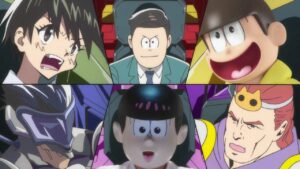 I honestly did not expect a second season of “Mr. Osomatsu” (“Osomatsu-san”) and, to some degree, they might not have, either. But they decided to take it in a pointedly slapstick direction, so they are more unhinged, more worthless and more destructive than ever before.

For the most part, the stories are self-contained and follow a standard that defined 60s sitcoms: there is a minor problem that gets blown up into a major problem, but it isn’t a problem at all, but they contrive some kind of wacky, off-beat solution to the problem, which gets resolved and things are right back where they started….except these guys are no closer to becoming adults as when the episode began.

Oh, they try mightily, striving with every fiber of their being, but it is a day late and a 100-yen coin short. However, since they are not opposed to making fun of themselves and their creations, this gives the show a refreshing take on things. In fact, the splash panel is all six of them, fully determined to become adults, but ending up as a different anime style. The rest of the season is like that.

There are change-ups to things, however. Episode 18 “Iyami, Alone in the Wind” is an anime version of “City Lights” and is just as heartbreaking as the original movie. Then, as we close in on the end of the second season, things take a very somber tone when a person who is working on a NEET Correction facility wants one of them to be his model and spokesman. But which one of the brothers is going to be sent off? (as the person in charge of this has no desire to take on all six).

There is still a balance of humor and drama, but you wonder if it is all that effective when they try to do both at the same time. In any case, I would certainly ask you to watch this series. It is strictly cornball and dopey, but at the core, there is a heart and soul that is not always evident in other animes.

Now, because of the odd nature of the show, you might feel it is the same thing every week, and, in that sense, you are not far off the mark. But because the overall tenor of the show is slight, I feel that you can binge it and enjoy the absolute work these brothers do to absolutely avoid work.

And remember, it’s first run until you’ve seen it. Who should I choose?