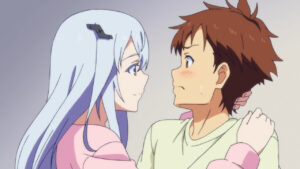 The Japanese really love their robots, whether it is the standard mechanical type, their Gundams or the AI versions. They all have a place in their society and “Beatless” takes a look at a world where everyone seems to have this caliber of assistant or compatriot or bodyguard. Well, almost everyone.

Arato Endo (him) is your standard guy, in the standard year of 2105 and there isn’t a hover board around for miles and miles. Yeah, he would like to have one of these androids, but aside from them being very expensive, you also have to indemnify them against any potential damage or problems they might incur. That could get pricey and he just doesn’t have that caliber of scratch lying about. In fact, I don’t think he has any scratch (do they still use real money, or is it all bitcoins or electrical impulses or robot chickens?)

One night, after hitting up the local Lawson’s or whatever the future 7-Eleven might be, he is attacked by an hIE that has gone berserk. Lacia (that her hIE), saves his life, but some other hacked autonomous auto tries to run them down (hasn’t Tesla fixed those problems yet?) She forces Endo to do the indemnification and she will save him. He does and she does and all is now sunshine and lollipops.

Because Lacia is such a beauty, she is scouted by a modeling company and Endo is shown a world that he has always dreamed of. But every silver lining has a cloud and that manifests itself in a pitched battle with other hIEs that rebel against their status, all from the Memeframe Company. We follow this two-show series.

I mean, when it started out, it reminded me of a “DearS” rip-off, in that a nerdy dweebleblock somehow manages to get his hands of one magnificent piece of real estate. But then, this one turns quite dark, quite fast and then the show morphs into a dystopian future, where survival is on the table and you could be offed by that cleaning hIE, down on the corner, out in the streets.

I had a difficult time with the second part of the show, as it became, for me, harder and harder to figure out the real plot, as it seemed to be an endless series of attacks and revenge. I know they want these hIEs to be more human, but can they honestly feel jealousy, rage, frustration and/or homicidal thoughts? It’s when the battles commenced, you were never really sure if these special grade hIEs could even be destroyed. Can they? At all?

Now, I want you to know that I made a terrible discovery around the 18 to 20 episode mark: I was watching the show, but I wasn’t watching the show. The characters were going through their paces, everyone was spouting off their personal philosophies, actions and events were becoming more fraught and perilous and humanity was at the tipping point where destruction was imminent. I guess. It just felt like every episode was a kind of rehash of the previous episode.

I even did an experiment, where I stopped watching it for a bit, took a break and went back a few episodes to see where the problem lay. Or lie. Or resided. I still felt quite befuddled. What this means is that I didn’t like the show, as the initial promise was altered, but I can’t tell if it is a genuinely bad show. I mean, when I reference bad shows, I usually grab “Peach Girl” and “Gundam Seed Destiny”. A rigid colonoscopy would have been more fun, OK? But this was kind of ‘meh’. I knew how it was going to turn out, but the journey to that point was endless. I mean, have you ever driven from Elko, Nevada to Salt Lake City, Utah? It is miles and miles of miles and miles and it looks like you are not making any progress. That’s how I felt about this show.

Binging? That could help things, as the stories string together better and may create a stronger sense of continuity, but that really resides within you. It didn’t for me.

And remember, it’s first run until you’ve seen it. I don’t have a soul.