December 4th, 2020 in Anime, General Reviews by The Droid 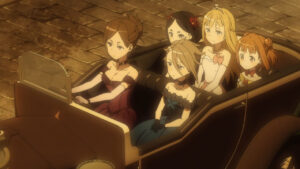 This first came up as an offering at AX 17, but since there was zero description in the handbook about it, my initial thought that it was going to be a stupid rom-com, about a princess who, for whatever reason, has to be the principal of a high school for a year and learns about ‘commoners’ and their problems. I could not have been more wrong, as it is an Alternate Universe Steampunk Spy Drama. Thus we arrive at “Princess Principal” (“Purinsesu Purinshiparu”).

At the start of the 20th Century, the United Kingdom made a discovery regarding the mysterious substance cavorite. (There is literary precedent for this: this is the substance used in H. G. Wells’ “First Men in the Moon” story, to power them there). This is both an energy source and negates the effect of gravity. Since the UK (or, for this show, Albion) has a near-monopoly on it, it then allows them to turn into a gigantic Empire, and a great air power as well, permitting massive heavier-than-air ships to soar throughout the skies. They now extend their scope of influence even further around the world to become the Greatest Empire Ever. (And somehow bypassing the Wright brothers and their attempts at flight).

Well, whenever there is growth, there is pain and a revolution within the country occurs, as the working class felt the ruling class was ignoring their plight (something they had done for a ton of years beforehand). Thus is ignited the “London Revolution” where the lower classes attempted to overthrow the royal family. Eventually, the two sides reached a stalemate, and a great wall was erected through the middle of London, splitting Albion into two nations: the Commonwealth and the Kingdom.

By the look of both dress and automobiles, it feels like the 1920s when we start our story. We are at the prestigious Queen’s Mayfair Academy, where our spies are ensconced. We start off with Ange (passenger front) and Dorothy (driver). They form the initial core of this cell. They are trying to do Operation: Changeling, where they are going to replace Princess Charlotte with Ange, who bears a strong resemblance to her. Let’s just say that things get co-opted and the Princess (passenger rear, middle) joins the cell, accompanied my her servant, Beatrice (passenger rear, left) who had an operation by her mad scientist father that placed an artificial voice box in her throat, which allows her to mimic any voice perfectly.

They are later joined by the Asian assassin, Todo Chise (passenger rear, right), as a kind of ‘cultural exchange’ program. This group, now called Team White Pigeon, do what they can to aid the Commonwealth and cause harm to the Kingdom, especially derailing the plans of the completely evil Duke of Normandy.

There might be confusion when you first start the show, as it opens with Case 13, when they are a well-oiled machine at this point. So, it has done “The Prisoner”/”The Melancholy of Haruhi Suzumiya” trick, in that the order presented is what THEY think the order should be and not the lineal order. With the show concluded, you may want the more traditional approach to things, in which case, ‘correct’ show order would be 2, 3, 5, 4, 9, 1, 7, 6, 8, 10, 11, 12 (the last three are the meat of the arc and makes sense it is presented as such).

It is a rather grim and gritty series, in that you see the seamy underbelly of London. Now, despite ‘Victoria’ still being queen (in real life, she died in 1901; here, she is still purring along), it is no different culturally, in some circumstances, than when Jack the Ripper made the scene. The gap between rich and poor is immense and the Kingdom is going to do what it takes to keep it that way. It is a very good period piece, as you get the feeling of the era (although I do not think that technology would have sped thing along by at least a decade sooner).

The other factor is that there are no real friends here. You have co-workers or a fellow companion, but with lies built upon lies and that the truth is an elusive concept, you are never really sure about anyone or anything. They would shoot you in the back as serve you a cup of tea. The stories are strong and well-paced and everything is done with a clear purpose in mind, even if our minions are only vaguely aware of those goals. The open end to the season means more cases are on the way, as the ultimate goal has not been achieved. I would suggest catching the last three episodes straight through, as they form a very strong arc that you don’t want to interrupt.

And now comes the question of binging and this is a tough one to answer. Now, it can easily stand up to the push, especially if you are willing to put it in correct viewing order, but I prefer that you let it spool out slowly and try to catch all the subtle hints and clues that are strewn about. Not all binging is warranted and I feel this is one of those times that prudence should win out.

And remember, it’s first run until you’ve seen it. I’m from the Black Lizard Planet.

One response to “The “Principal” Cause”