The Smart Part is Us “Creators” 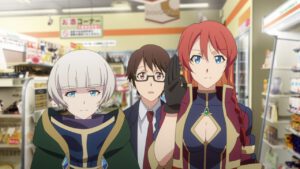 This is a show with a fairly standard concept, but brought forth in disturbing and dangerous realities. The idea is very simple: what if your artwork came to life and invaded YOUR world? A caliber of reverse isekai? Thus, the approach to “Re:Creators” (“Re:Kurieitāzu”, stylized as “Re:CREATORS”).

It all began with Sōta Mizushino (that bespectacled nerd up there). He is a young high school student and anime fan who dreams of writing his own light novel. While watching the anime  ‘Elemental Symphony of Vogelchevalier’ for inspiration (he has some severe writer’s block), he is dragged into the anime’s world, where he witnesses a battle between the anime’s character Selesia (the reddy up there) and a mysterious girl wearing a military uniform.

After returning with Selesia to the real world, Sōta discovers that other characters from different stories and forms of media were also brought into the real world as well, some of them aligned with the military uniform girl, who promised them the ways to end the strife in their worlds and a way back home. Those folks, however, are unaware of her true intentions. To stop her, Sōta and Selesia agree to find the other characters hanging about and bring them home to ‘our side’, as the Military Uniform Princess will bring untold destruction to every world that exists. Well, that’s a hard way to end your evening.

The show details the discovery of which characters make the migration to this dimension and the true history behind the Military Uniform Princess, later named Altair. What we discover is that most of the creators are Class-A nerds; just what you would think they would look like. But the characters they bring forth are dark and dangerous and have a hard time understanding the new reality upon which they have entered. Of the group, the ‘worst’ of them is Magane Chikujoin, a purely psychotic murderer, whose true intention always revolve around herself, but is still a force to be reckoned with, as she can and might and will kill anyone she takes a fancy to.

The real problem is that Altair is one tough customer: almost impossible to kill, outwit or outplay, in this ultimate game of Survivor. To this end, a massive trap is laid, as the creators use their powers and abilities to alter their stories to set up the climactic battle that will determine the fate of numerous worlds. But it has to be laid out in a very special manner. The key to all of this is acceptance (or what I call ‘resonance’). If the manga-reading and anime-watching public refuses to buy into things, then the real-world things cannot be done and we all go skating to the Ninth Level of Hell. (Bring a sponge.)

The entire idea was a workout in and of itself, as the creators had to convince their particular character as to what they need to do and also work on the reading/watching public to agree to this potential alteration of the rules, as we do some huge massive cross-over episode. Near the end, it felt like they were dragging out things to make for a ‘complete’ first-season run, as we had to explain and re-explain things. Look, I may not be smarter than the raccoon, but I’m better than the horse. Still, when you have the climatic nerd-fest, well, that’s a treat in and of itself.

It is an odd examination of art and life and I often wonder if creator and creation would actually like to sit down and talk things out, as to how the latter’s life is going. The ending became a “Can You Top This?” as every plan, every parry, every trick shot was countered. I can’t give this as high marks as I would like, but I will suggest that you check it out. As to the question of binging, it would certainly help with the latter portions of the anime, as the complex and intricate plan is laid out and executed, but it might be a bit much to try and take in all at once.

There are multiple story lines, both in our world and the back stories of the characters who do make the jump, so this might be a repeat binge, where you watch each show twice to make certain you haven’t missed anything. There is just so much going on that a week-to-week approach is inadequate. Things unwind in real time and the sense of urgency gets heightened by chaining. I do not know if it explains things better, but the anxiety and annoyance that you have for some of the characters comes to the forefront. Maybe take the weekend to knock it out, but do sit down and take it all in at once.

And remember, it’s first run until you’ve seen it. My pain is for your enjoyment?