Welcome to My “World”

October 22nd, 2020 in Anime, General Reviews by The Droid 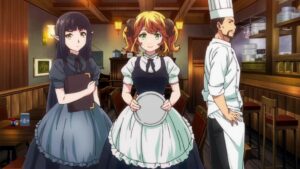 As much as I like “Food Wars!”, it can get too much for its own good, with those foodgasms and the overweening prats that infest the school. So when another dining series cropped up, I wanted to check it out. This is the bailiwick of “Isekai Shokudō” (“Restaurant to Another World”).

We are trying to find the Western Restaurant Nekoya, situated in a mundane corner of an undisclosed Tokyo shopping district within a bland building. You can bet a nickel or a five-yen coin that Zagat and/or Michelin have never been out here. It may never have gotten on any “Best of the Area” lists, as it is a bit of a trick to actually find. Anyway, despite its name, it offers a lot of Japanese dishes in addition to Western ones.

It’s like any other small restaurant: open during usual business hours and closed during holidays and weekends. But secretly, it is open on Saturdays, (or the Day of Satur, as it is referred to) as on this particular day, it creates its doorway to worlds inhabited by elves, dragons, animal men and other fantastic beasts, who enter the restaurant and partake of its menu, with many of them becoming regular patrons.

The series looks at these divergent people (or creatures; how do you define a lizard man?) as to how they got here and why they keep coming back. In one sense, it’s kind of like “Cheers”, where everyone knows your name and your favorite dish. It is a rather hefty cast, but we will concern ourselves with the three key players, from right to left:

Master. He has no real name. He inherited this restaurant from his family, who have been serving up the expansive clientele for many years.

Aletta. She is a demon (note the brown horns). She was rejected by the human world, but given a place to work here by Master.

Kuro. She is actually a dragon, but a fierce one whose killing sent her into isolation. She discovered the door and a way out of her misery.

They serve about 20 regular folks. Folks who would normally be mortal enemies, but here, this neutral ground, they dine on a variety of foods and desserts. The thing is THIS is what “Food Wars!” should have been. We see the dishes and are given a small idea as to how to prepare them, but it is the enjoyment and satisfaction of dining on something you like, and with good company, that makes the food that much better.

Some of the stories are rather strange, like Gaganpo, that lizard man I spoke of earlier. He is a major sap for omelet rice and the champion of the tribe is the one who goes through the door. He brings back the treat for the tribe but, while here, eats his fill of them, like four or five. Big motivation to remain champion.

Or Alphonse Flugel. A sea captain who was shipwrecked by a Kraken, he discovered the door and was able to dine well once a week until he was rescued. He did manage to find another door location and continues to come around after thirty or forty years.

You get a variety of tales from a variety of exotics. It may seem that it gets dull and repetitive, but the stories are lively and the backgrounds on everyone keep it from slipping into just watching folks eat. True, they never vary what they eat when they come (except when the experimental pork soup comes out and everyone dines on tureens of it), but they are satisfied with it.

I did have a question about money. They pay in their personal currency, which is strange and exotic. At least you can do something with gold coins or silver ingots, but what do you do with exotic crystals or strange metals? Well, Master is able to make it all work, which keeps the restaurant floating along. I would have like to see what it was like the rest of the week, but then it’s just regular boring people or the occasional lost tourist. That’s not going to compete with a mermaid or a wood elf, right?

I really do not expect a second season for this show, as there is not much more you can do with it. It is a satisfying run as it stands; otherwise, you end up with “Working!!!!!!!!!!” (How many seasons do they have?) and that got dragged down pretty fast. As to binging, this is one of those shows where taking it slower is better. Much like a good meal, there is no need to wolf it all down at once. My two-a-day approach worked well and I think it will work well enough for you. And a welcome change of pace from ‘Food Wars’.

UPDATE: I have to say that this was my first encounter with an isekai show, but I saw this sometime back and it took a while for me to catch on that this was even a genre. I just took it as just another caliber of adventure show and the situation was just a situation to help propel the story. I now know better.

And remember, it’s first run until you’ve seen it. Welcome to our restaurant.

One response to “Welcome to My “World””