What a “Wonderful World”

December 19th, 2019 in Anime, General Reviews by The Droid 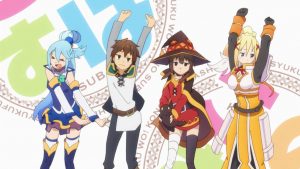 I knew that there was going to be a second season of this series. We had accomplished NOTHING in the main goals that we had set out for the first run, and so we have to continue the fight….as it were. So, the second season of “KonoSuba: God’s Blessing on this Wonderful World!” (“Kono Subarashii Sekai ni Shukufuku o! ) picks up where it left off, but with a caliber of false crisis.

Kazuma Satō (guy) leads his little guild of (left to right) Aqua, a water goddess; Megumin, an explosion witch; and Darkness (real full name: Lalatina Dustiness Ford), a crusader. However, at the end of the last season, Kazuma blew up the mansion of a noble and now is in trouble. Well, like everything else in this series, it all goes off the rails pretty fast.

The gang thinks everything is AOK and hunky-dory until the local police show up and accuse Sato of…working in concert with the Devil King! What?!!? You see, when he blew up that noble’s castle, he is now seen as an agent provocateur. This means that all of his possessions are repossessed and they are all flat, flat, flat broke! They take on a variety of quests to earn money, especially one to Keele’s Dungeon. But a miscalculation there puts the town at risk again….again….again. Look, these folks put the town at risk every single day, whether it’s from an Arquillian Battle Cruiser, or a Corillian Death Ray, or an intergalactic plague that is about to wipe out all life on this miserable little planet.

Things go from bad to worse when Darkness is put into an arranged marriage and they must do battle against a new foe, Vanir, who wants to take over everything. The series goes completely bonkers when they take in a trip to a hot springs at Arcanretia and they discover that it is not much more than a religious cult town. There, problems follow and they are….but why spoil the fun?

I really enjoy this series. Some folks might get tired that they are in so much hot water all the time, they might as well be lobsters, but that is the charm of the series. You’ve heard of the Fab Four? This is the Flab Four. How they manage to get anything done is a source of constant amazement and that the collateral damage is greater than if they would only let it be.

Seriously, how much worse would the Devil King be compared to these nitwits? And they allowed Darkness full rein on things in her life so we can see how seriously deranged she is. There is a sequence where she goes up against Running Night Hawks which plays into her masochistic nature. And the problems encountered in Cult Town make you go “Oh, well, this is them.”

And because we have STILL accomplished less than zero, we’ll be back. Kazuma is never getting back to his real home; THIS is your real home, boyo, so you had best get used to it.

And remember, it’s first run until you’ve seen it. I am here to challenge you!