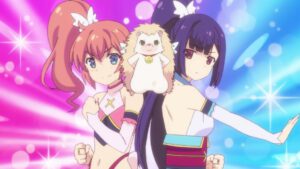 How should I refer to these shows? Estrogen-heavy? X chromosome only? Ladies Night Out? I am seeing a larger-than-normal amount of these female-centric shows, not just in the lead cast, but overall, as if guys don’t really exist, except as background characters. And with another entry in the “Girls Who Save the World” category, we are now brought to “Twin Angel Break” (“Tsuin Enjeru Break”).

Now, what bothered me is that this is a sequel, having missed the original run some six years past, but that is not going to affect anything in the telling of this tale, as it’s like the next generation. Meguru Amatsuki (left) grew up on a tropical island, but wanted to transfer to St Cherrine Academy (and let’s keep those cherry comments to yourself, OK?). She wants to be a heroine (or do we just lump all people like that with the ‘hero’ label, regardless of gender?)

Well, she gets along well with everyone except the rather snooty and standoffish Sumire Kisaragi (snooty and standoffish to the right). At a performance of a famous shamisen player, Meguru notices a strange aura absorbing her new friends’ energy. She’s quickly informed by a talking hedgehog (Miruku-chan, in the middle) that the odd coin she found earlier is her ticket to become a magical girl called a Twin Angel.

She isn’t able to defeat the villainous musician on her own, but a second Twin Angel, who turns out to be Sumire, steps in to finish the job. Unfortunately, Sumire has little desire to keep being a Twin Angel and/or associate with Meguru. So, the series is how these two divergent types can work together to defeat these evil forces, bent on sucking away all of these auras or energies and maybe even all the melon soda!

This show is fluff. I mean, if you wanted a Magical Girl show with edge, that would be “Magical Girl Raising Project”; this one is closer to the first season of “Symphogear”, where the young tyro has to be accepted by the seasoned vet, who (a) doesn’t want a partner, (b) doesn’t need a partner and (c) isn’t going to admit they have to have a partner.

But the pro isn’t going to waste time trying to educate the young charge, so the tyro bumbles about and makes a lot of rookie mistakes, thus complicating matters. They eventually come together, as they battle a ton of foes and we learn the real truth behind Miruku, who comes to fruition before the Final Boss Battle and…..

Look, it’s not a bad series, but the question becomes, what do you want from your Magical Girl show? They are a bit too young to be flirty, a bit too naïve to be forceful, a bit too immature to be responsible and the overall concept is underutilized. And since they have miles to go before they sleep, it smells heavily of needing a second season to complicate their lives before simplifying it. Should you binge? Yeah, go ahead and knock this out. I mean, things are so slight that you can easily take out a day and not feel oppressed by doing that or feel the need to take a dog for a walk around Episode Seven. Well, I mean, if you WANT to take the dog for a walk around Episode Seven, go ahead. Unless you want him chewing up your favorite slippers.

And remember, it’s first run until you’ve seen it. Let’s work together.