You Have To “Live”

December 5th, 2019 in Anime, General Reviews by The Droid 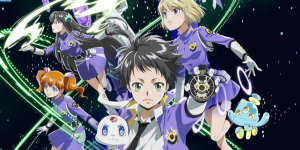 There is something wrong with the artwork, both in character design and actual results, for this show. It feels off, even for anime. It’s as if they wanted to be both cute and serious at the same time, but it didn’t work in either direction, thus a rather conspicuous failure for me. Do the eyes have to be that shiny? Do the skirts have to be that shorts? Must everyone be a tad on the thick side? Greetings, strangers, and welcome to the galaxy of “ēlDLIVE” (“Erudoraibu”).

Let us meet Chuta Kokonose (Mr Badge, right in the center). He is a regular middle school person. Well, maybe not ‘regular’. For years, he has heard a voice that no one else can hear and people thought him to be a tad odd. (Look, I hear voices all the time, but they’re speaking Chinese, so I have no idea what they want.) One evening, while cleaning the muffin shop where he lives with an aunt, he is magically and suddenly transported to a space craft that is orbiting the Earth. This is ēlDLIVE, a secret space police agency, given the task of keeping the universe safe. Now, he has what it takes to be a space cop, but needs to pass a simple entrance exam to be fully considered for this position.

He is able to ferret out this rather pernicious criminal and the voice in Chuta’s head manifests itself as a being that comes out of his chest, Dolgh (that white rabbit creature. Go ask Alice.) Having passed the exam, he is now a member of ēlDLIVE and with his partners (left to right) Veronica Borowczyk, Nina Mikhailovna Pavlova and Misuzu Sonokata (and assisted by Chips, that blue blob to the right), they fight a variety of criminals that have no concern for propriety or property, surety or security. Or so.

It’s just that the ‘criminals’ are rather low-grade types, like a gum alien. There is a second story line, where we reveal a tragic incident in Chuta’s past and how that comes to haunt him. And when Misuzu is charged with a heinous crime, then the suspicions come hot and heavy. It’s just that I never felt anyone was in genuine peril with any of these problems or people. It’s just a slight series all around, seemingly done more just to see how many weird and wacky characters we can pack into a series.

You have one character names Melies, who looks more like Mac Tonight from the old McDonald’s commercials from the ‘80s (and Melies comes from George Melies, who shot the silent movie “A Trip to the Moon”, where the missile lands right in the moon’s eye.) Then there is an insect guy and also Harry, which/who is a series of pyramid-headed aliens. The overall effect is that it waters down everything. Instead of this being a discovery for Chuta to learn more about himself and what he has to offer, we spend a huge amount of time watching him get abused by Misuzu, chasing after aliens without any help or assistance into becoming what he could become and a boss that seems less interested in jail time for others and more interested in Miller Time for himself.

I don’t know if anything could have helped this series. It comes off as rather footloose and fancy free to the point where none of it matters. And the conclusion points towards a second season. Maybe this stuff works better in the manga, but once it gets to the screen, things get out of phase rather quickly. It’s not dangerous enough to be serious and a tad too harsh and cruel to be hilarious. It could have easily gone in both directions, but it split the middle and ended up with less than the whole.

And remember, it’s first run until you’ve seen it. Yoyoya!