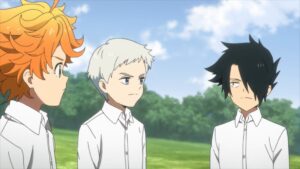 Every year, an anime comes out that towers over the competition and leaves even strong competitors in the dust. Some previous entries include “Attack on Titan”, “Erased” and “One-Punch Man”. For this season, it falls to “The Promised Neverland” (“Yakusoku no Nebārando”), a series that initially sucks you in with sunshine and light.

It is the future, 2045 (the episodes tell you that in a reverse date. Episode 1 is titled “121045”, so it is October 12, 2045) and we are at an orphanage. But this is no ordinary orphanage, not like in ‘Oliver!’ or ‘Annie’, with dark corners and dark motives and dark people. Everyone is clean and happy and well-fed. The house is huge and colorful, not some munitions factory repurposed for warehousing people.

It sits in the middle of verdant hills, expansive fields, massive forests with nary anyone else to cause mischief and mayhem. There is only one rule: do not go beyond the fence. Deep in the forest is a low fence, about a meter tall. It’s just a fence, but stay on this side of things. We enter the lives of these 38 children, led by the three 11-year olds (left to right) Emma, Norman and Ray.

Now, these days are not merely filled with gamboling and endless games of tag. There is some serious education going on as well, as they take endless tests and these three are the best and the brightest. One day, Conny, a six-year-old girl, has been adopted. We are all so happy she is going; we are all so sad that she is going. Maybe, maybe someday, we’ll get our chance. Her new parents are going to pick her up late this day, so we make sure she is dressed to the nines. Isabella, the woman who runs this house, known as ‘Mother’, will take her out to the Main Gate to meet them.

However, after they leave, they discover Conny’s plush, a stuffed rabbit, has been left behind. How could she have forgotten this? Emma (who is very athletic) and Norman (another physically gifted person) head to the gate to see if they can get this to Conny in time. And then…..and then they learn the real truth about this orphanage.

No spoiler here; you will discover this for yourself, but this is a game-changer and now shifts this bucolic scene to one of the most tension-filled cat-and-mouse shows you are likely to see. Now we are steeped in paranoia and suspicion and uncertainty.

The only sorta beef I have is that even taking into account as to how smart they are, there is still a lot of savvy for a bunch of pre-teens. I remember when I was 11 and I was hopeless; these people are on it. But I was willing to let that slide, as the story was compelling and involving. I am also going to make the suggestion that you binge it. The shows are in a tight chronological order. For the 12-episode run, it covers three months of calendar time, but the last three episodes cover three consecutive days. My daughter did the binge and really felt the tension throughout.

I do not wish to say more, save that there will be a second season of this, and I prefer you let this tale unfold before you like a flower in the morning sun.

And remember, it’s first run until you’ve seen it. It’s just a fence.