You Sometimes Have to Go a Little “Berserk” 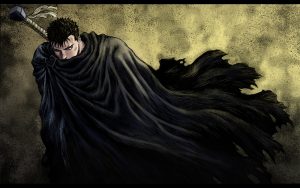 This is what I call an iteration series. Huh, what do you mean? The reason we have the year in parenthesis is that this show was done before, way back in 1997, but this version of “Berserk (2016)” (“Beruseruku”) is potentially a lot that the previous series was not, like openly bloody and endlessly violent.

Above is the mercenary Guts and he was a member of The Band of the Hawk, a more organized group of mercs. Serving Griffith, who wanted to rule a kingdom of his own, most of the band was wiped out during the Eclipse ritual. Guts had lost an eye and his lover, Casca, went crazy. You will not learn any of this back story through the series, but it may not really matter. All you need to know is Guts is seeking revenge and that, as The Black Swordsman, he is being hunted down as he is hunting down God’s Hand apostles, really mean, vicious monsters. The soldiers going after Guts are the Holy Iron Chain Knights, led by Lady Farnese do Vandimion, who believe that they are on a mission from God. So did the Blues Brothers and they destroyed a mall.

Into this delightful mix we throw Puck, a spirit of some type, who Guts accidentally saves; Isidro, a young thief, who Guts accidentally saves and Luca, a prostitute who has taken Casca under her wing and who Guts accidentally saves. Guts runs on the theory that he who is fights alone, fights better. What, like this guy doesn’t fight well enough? Now, he has all these hanger-ons. Sheesh! The series details all the moral conflicts that these people must address while having to deal with the cruel and vicious machinations of Father Mozgus, head of the Inquisition and one sadistic monster, which honestly makes him no better than the other monsters floating above and flailing about and lurking in the shadows.

The hardest part of this show is not the unrelenting violence, torture and gore that permeates the action, but the animation itself. A lot of it comes off as not much better than a scratch test or incomplete art work. It felt a lot like the artistic approach from “Knights of Sedonia”, as the CG work is stiff and stilted and the non-action sequences seem tepid and flat. The plot keeps the storytelling moving forward, despite the serious drag caused by the artwork and presentation thereof, but at what overall cost? How many times must I see the 20-year molars of all of these folks? I think I also saw an epiglottis or two as well.

I am not going to address the physics of the show. Guts wields a blade that is ten inches across and seven to eight feet long, so it is genuine heavy metal, but he cleaves people in twain like a hot car through butter. How can he even pick that thing up? (There is a very funny sequence where Isidro tries to do that). The whole show builds to this massive fight scene at the Tower of Conviction and this is a fight that crosses the last half of the show, but the show hasn’t officially ended (and while scribbling all this down, another season was confirmed), so Guts’ overall quest remain far more alive than the bulk of the characters.

The violence is of such a nature that you may only get slightly grossed out the first time you see it, but once the benchmark is set, it’s more a means to an end, despite some terrifying torture sequences in between. This world they live in is short, brutish and ugly and any loose or errant comment could lead to your death, all done through the loving hand of God as ministered by creepy Father Mozgus. If you can tough it through the art style, there is a good story here, even with that tired trope that those in the Clergy are bigger perverts and liars than those they are trying to save.

I do need to address the fan service, such as it is. Puck, being a fairy or a sprite or something like that, appears to be female, but it is hard to tell, as his/her body is almost like a Barbie doll, so it’s smooth with nothing to truly indicate a gender. Yes, she is naked, as what need has a sprite for clothing? There is another sequence where Lady Farnese is topless, but all you know is that she has breasts where they are supposed to be, yet no details. Not that it matters; whatever kind of ‘enjoyment’ you would get from seeing a naked lady is deluged by the grim and horrific violence that almost immediately follows.

And it’s not all mindless violence; there is a genuine reason for it, if only to see the talent and viciousness that Guts has to offer. It’s just that no one seems to learn from it. Actually, it’s like that was your only mistake and game over. Would better artwork have helped this show? That is hard to say, but the poor use of CG downgrades a lot in my book. Still, the votes go out for you to take it in…..just not all of it at the same time. You need to pace yourself on this one.

And remember, it’s first run until you’ve seen it. I will find her.