“Cheer”, Cheer, The Gang’s All Here

January 28th, 2021 in Anime, General Reviews by The Droid 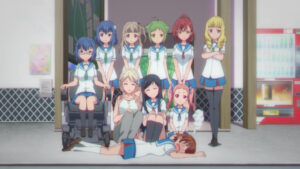 More Japanese weirdness. OK, sure, this is another “Girls Who Save the World” tale, but what they are doing is saving their city from neglect. Huh? Wha? Eh? This is more of a way to promote the virtues of your particular city, and this is done via ‘action heroines’, some superhero girl who battles the baddies, while extolling some aspect of the city she represents. Well, everyone wants to get in on the act and Hinano City is no different. Thus we have “Action Heroines Cheer Fruits” (“Akushon Hiroin Chia Furūtsu”).

We start off with Ann Akagi (that passed-out miss in front; it was a long day). Well, we actually start off with Mikan Kise (back row, third from left). She was going to take her sister to see one of these shows with her favorite heroine, Kamidaio, but the show was cancelled. Not wanting to disappoint her, he asks Akagi to help her put on a show for her, which was such a big hit (a video of it was uploaded), they are asked by student council president Misaki Shirogane (second row, black hair) to be Hinano City’s action heroines. Thus is put into gear their efforts, as many other cities are doing this as well.

They slowly assemble their staff, so let’s introduce the rest of them:

Mako Kamisu, the woman who plays Kamidaio (she stopped by for a visit).
Misaki.
Hatsuri Momoi, her family owns a construction company and helps with practical effects.

Genki Aoyama (wheelchair), she is the backstage crew and runs lights, sounds and effects.
Yūki Aoyama, twin sister, she was an pop idol, but quit after Genki’s injury.
Mikan.
Mana Midorikawa, she is a shrine maiden and makes all of their costumes.
Roko Kuroki, she is VP of the council and her family runs the train station where the performances are held.
Kanon Shimura, an athletic rival of Ann, she plays one of the villains in the show.

Now, they don’t all come on at once, but the cast builds as the popularity builds and the shows become more elaborate and involved. Aside from all of the personality problems and technical concerns, there is another storm cloud on the horizon. You see, Misaki’s grandfather help build the city’s cultural center and it was considered a caliber of boondoggle at the time. There is a movement afoot to tear it down, so unless Misaki can show that the building has worth and value (by basically selling it out with an Action Heroine performance), her grandfather’s work would be all for naught.

Yes, this raising a ton of questions, like, what is Mom doing to help or hinder? Isn’t this more Mom’s job and not something to drop on the shoulders of a 16 year old? And couldn’t the Board of Supervisors decide to go ahead with demolition anyway, regardless of anything else? And if these pressures weren’t hard enough, there is now a rating system to determine the best of all these city heroines, so the drive to remain in the Top 10 and improve your standing gets even more intense.

It’s just that I saw a caliber of show like this immediately before, “Sakura Quest”, where some lady is hired to help promote a city by being its queen for a year. The slight difference of putting on a Power Ranger-type performance, as opposed to wearing regal robes didn’t alter the core show for me. This one is certainly geared to the younger types, who want to see that female camaraderie while performing, whereas the other is more sober, sedate and mature in how they try to accomplish the same thing.

It’s an OK show, but a lot of the internecine conflicts got almost paralytic and suffocating. You just sit down for 10 or so minutes to explain things and it all clears up. And the funny thing is….it all cleared up! Everyone got what they wanted and things are looking rosy as we move ahead to the second season.

Yes, yes, yes. Because of the odd nature of this show and the constant struggles with what is going on and down and across, this is another excellent candidate for the Full Binge Approach, as we see all the struggles play out in a caliber of real time and see how they overcome the latest obstacle or roadblock to their eventual dreams. And you won’t get that ‘tired feeling’, as there is enough differences going on that it doesn’t fall into the sameness trope.

And remember, it’s first run until you’ve seen it. I will defeat you!