January 10th, 2019 in Anime, General Reviews by The Droid 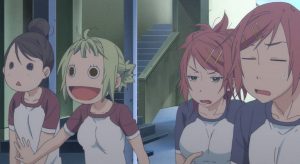 One gets the feeling that anime companies will do a show about anything. I mean, there are shows about playing Go (“Hikaru no Go”), performing rakugo (“Shouwa Genroku Rakugo Shinjuu”) and even one about soda cans that turn into girls (“Akikan!”). So, I initially was not surprised when they did one about scuba diving. For most of us, what we know is whatever was gleaned from Jacques Cousteau specials on TV, or, in my case, “Sea Hunt” (yeah, check the archives for that one.) But what about something a tad more casual? Too bad “Amanchu!” is not that show.

The capsule is as simple as it gets, OK? “Futaba Ooki, a shy girl (far left) who just moved in from the city to the ocean side town of Shizuoka, meets Hikari Kohinata, an erratic girl (to her left) who loves scuba diving. Together, they join their school’s Diving Club and discover the joys of underwater exploration.” Well, that seems simple enough, right? This is where we go off the deep end, in that a ton of artistic decisions leaves one scratching heads as to what it all means or what they wished to accomplish.

The first is perfectly illustrated above. Futaba, who gets confused or dazed more than you imagine, slips into the scratchy eye mode. Hikari, when overly excited, goes into the simple art approach. The two at the right, the sister and brother duo of Ai and Makoto Ninomiya, are a bit more ‘normal’, although I think everyone in this show suffers from The Bends, in the fact that Ai gets easily unhinged and seeks some kind of revenge or retribution for any caliber of slight, real or perceived. Makoto tends to absorb a lot of the punishment that Ai dishes out, so it’s all knee-slappin’ good fun. Look! Look! He got punched halfway across the campus when he was halfway across the campus! Hyuk, hyuk!

The second artistic decision is their school uniforms. It is as though they are all Gibson girls. They wear dresses that reach to their ankles, are nipped in at the knee and have lots of ruffles. It is less of a uniform and more of a costume, in case we wish to do a Sherlock Holmes story or perhaps a remake of “Gigi”. It’s just both odd and awkward to wear these things as well as a bit anachronistic, unless we are promoting that they are damsels at school and more flirtatious mermaids in the water.

The third artistic decision is to delay the meat of the story (getting into the water) for as long as possible. Yes, the backgrounds are gorgeous and we do get a taste of the underwater treasures early on, but it takes forever to get into the ocean and DO all that they have learned. I understand the need to put forth intelligent and well-presented discussions regarding scuba gear and underwater safety, going as far to explain atmospheres and water pressure, but is it all that honestly necessary? I also recognize that this is a show about friendship and how two diametrically opposed people can find commonality and enjoy things together, but I have seen these things done better, both as a friendship series and as a sports series. (We will argue if scuba is a sport or a pastime at a later date. Just go with it for now.)

I personally felt more could have been done with some stronger, smarter decisions in regards to character design and pacing. Both are rather off and it affects, for me at least, the enjoyment of the show, as I am painfully aware when things just don’t look or feel right. The characters are strong characters to the point that they seem anchored in place, with little or no desire for growth and understanding. This is not a bad series. I have seen tons of bad series; this is one where more could have been achieved, but it was decided not to.

And remember, it’s first run until you’ve seen it. I love the ocean!