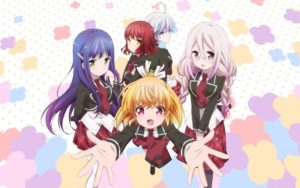 Every once in a while, you come across a show with a concept so odd, that you have to look into things a bit more deeply. Such is the case of “Anne-Happy”, (Anhapi♪), also known as “Unhappy Go Lucky!” or “Unhappy”. The plot is surprisingly thin:

Tennomifune Academy is an elite school where students train in various subjects such as arts and sports. The school, in a sense, chooses you, not the opposite (much like a wand from Ollivander’s). That is, except for the students of Class 1-7, a.k.a. the “Happiness Class”, who have been deemed “unfortunate” and must try to overcome their own misfortune and achieve happiness. The series follows a core group of five students, who each have their own problems, as they try to find their own elation.

Our unhappy band of adventures is (clockwise from the bottom):

Anne Hanakoizumi (Hanoko). She is constantly falling into manholes, the river, down hillsides and whatever.
Ruri Hibarigaoka (Hibari). She is in love with the safety construction mascot at worksites.
Hibiki Hagyū (Hibiki). Terrible sense of direction, she has strong feelings for Ren.
Ren Ekoda (Ren). She is beset with animals that are drawn to her for some reason.
Botan Kumegawa (Botan). Easily injured, she carries around her own first-aid kit.

Guided by their teacher, Kodaira, and the robot rabbit, Timothy, they are taught how to find their own happiness with a series of actions and events that get more and more bizarre as the show progresses. The show spans the time frame of April 7th to August 19th to see how things work out. I guess these ladies are made of sterner stuff, as they are constantly last and seem unable to break the cycle of problems and depression that befall them. The harder they try, the harder they fail. And when I say last, I don’t mean merely last but miles and miles, far and away, dead, dead dead last.

I would have liked to have seen some of the other students in the class and their series of unfortunate events, so I could understand better how these five fit into the larger scheme of things. I have seen large-cast school shows handle things well and we are not asking for a lot, just to see what other ails and travails befall the rest of the students. Such is not the case, so we have no reference point as to how hapless, helpless and hopeless the quintet is, save for the notion that they are not only going to lose, but lose big, big time.

After a while, it drags on you, as they seem to be retrograding and happiness is merely a ‘Peanuts’ book title. Also, the ladies are almost painfully cute, as though they are some kind of stray, lost anime, seen in an alley, which needs to be dried off and fed and placed by the fire, as they cannot seem to make it on their own. If anything, this would be a good starter anime, so people can see what it out there and not get scared off by something stronger. I am sure there will be a second season, as we are no closer now to assisting these ladies than we were 13 episodes earlier. And we have another semester of school looking at us, including Christmas Break!

And remember, it’s first run until you’ve seen it. Ooops, I broke my hip again.