Fly Me to the “Moon”

October 1st, 2020 in Anime, General Reviews by The Droid 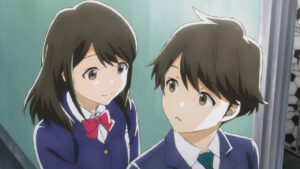 Do you remember when you first fell in love? Awash in all those giddy, uncertain emotions that were swirling about you in a kaleidoscope of feelings and sensations? Yeah, well, when I first fell in love, mankind had just discovered the wheel, OK? It’s been a long time. Still, with what you get from “Tsuki ga Kirei” (“as the moon, so beautiful”), it is a reminder of those days.


Kotaro Azumi (right) and Akane Mizuno (left) became third year students at junior high school and are classmates for the first time. They’re put in charge of the equipment for the sports festival, and slowly grow closer via LINE (a caliber of instant communications). These two, along with fellow students, Chinatsu Nishio and Takumi Hira, relate to their peers through mutual understandings and feelings. As their final year at junior high school progresses, the group overcomes their challenges to mature and become aware of changes in themselves.

Wow, that’s a lot to take in, but it really is about how one grows and matures under the influence of another and what it means to think about the welfare and happiness of another. Sure, there are a lot of false starts and missteps, as is with any caliber of relationship, but you get the feeling that these two lost and timid souls genuinely and deeply care for each other, but do not understand the complexity of these emotions and are, naturally, scared as to what they represent and how to best address them, especially when there really is no Owner’s Manual in regards to this. Who wrote The Book of Love?

It is a soft and gentle show and the artwork reflects it. Although not done in a pastel palette, there is a muted quality to it, as though it is more of a remembrance of things past than actually occurring events. Some folks might feel that the ending is both rushed and a tad sappy, as we miss a lot in a dash to a conclusion (perhaps one additional full episode might have helped tie it up better), it is a fine series and one that I would select to get someone interested in anime without clobbering them with “Eraser” or “Tanya the Evil”.

I also discovered that the title of the show is a caliber of code to say “I love you”. I may have tipped something too soon, but I had a feeling that it was going to end up as it did anyway.

Some might feel it moves too slowly or that they are not understanding things faster. That is more the nature of the pacing of the show than the internal workings of our characters, although you sometimes feel they are intentionally dense, as if they want some great and grand external force to make it so for them, so they don’t have to work at it.