January 20th, 2022 in Anime, General Reviews by The Droid 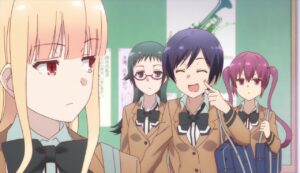 What is it with food shows? It seems that practically every time I turn around, there is another food show. But you have to be careful. I mean, to me, it is more than just seeing people eat endless plates of food or trying to learn the cultural and geographic difference that makes the same dish not really the ‘same’ dish. This is kind of the mixed approach to “Ms. Koizumi Loves Ramen Noodles (“Rāmen Daisuki Koizumi-san”).

The object of our desire, Ms. Koizumi, is at the left. She is rather distant and aloof, having just moved into the neighborhood. She keeps to herself and her only indulgence is ramen. Of which she contains encyclopedic knowledge of it. Trying to break through her façade are classmates (left to right) Jun Takahashi, Yū Ōsawa and Misa Nakamura. Yu tries the hardest, but Koizumi is one cold fish…..except when a bowl of ramen is placed before her. Then, the real her comes out.

Now, on the one hand, it is nice to learn about all the permutations that come with ramen, but my chances of being able to tour Japan and indulge are on the thin, thin, thin side. On the other hand, Koizumi is either willfully ignorant or obligingly dense as to the efforts of the people around her to open up and be more personable. Or maybe people are far less interesting than noodles.

We learn of the huge amount of styles and approaches to ramen, as well as seeing equally different approaches to service it. It might be a counter where the ramen is slid through a panel in front. Perhaps it is a series of cubicles, where you can eat in a type of crowded seclusion. Maybe it is a series of grand tables, where you sit down and chow down.

Although we learn a lot about ramen, I feel that the show runs in place, as none of the classmates are any closer to cracking Ms. Koizumi’s personality. And she appears to only eat ramen. In one show, she appears to have four or five bowls of it in one day. Isn’t that a huge amount of starch? Now, the food and the locations are marvelous, as a lot was invested in both the sets and the meals, but everything else is short-changed, so you are left feeling that you have missed something. But you can’t miss what isn’t there.

In the end, I have to let you decide to see it. I wanted more of pulling her out of her shell (much like “Yuru Camp”) instead on the mono-minded approach to ramen and consumption thereof. And I am still uncertain as to the key differences between Wakayama and Yokahama (even though the show opens up with a north-to-south glide down of Japan and a variety of local ramen dishes), so I guess I am no better than anyone else in regards to this. A second season? Wouldn’t bet against it.

As to the ever-present binging, I vote ‘no’, as it really comes off as watching eating, eating, eating and the story of trying to make Ms. Koizumi more personable and less of a stiff gets shoved aside once that steaming bowl shows up.

And remember, it’s first run until you’ve seen it. I want ramen.