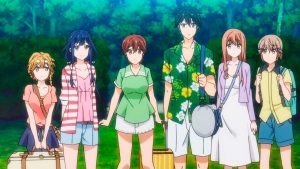 This is a strange romantic ‘comedy’, sharing more in common with “Nisekoi” than anything else, except there is a true sense of not knowing what is actually going on by those to whom all of this anger is directed. This is the life of “Masamune-kun no Ribenji” (“Masamune-kun’s Revenge”).

Masamune Makabe (green Hawai’ian shirt) was a chubby boy who had a close relationship with Aki Adagaki (striped shirt), a beautiful wealthy girl, who already was a real mean number. One day, Masamune had the temerity to confess his love for her and she cruelly rejected him. Since she remembers people by the horrible names she dubs them, he became “Pig’s Foot” (as he was as pretty as that appendage)

Many years have passed. Masamune changed his name, began dieting and working out every single day, actively tracking all that he did and ate and working diligently, to become a fit and handsome, albeit vain, high school student. When he encounters Aki once again, she doesn’t recognize him and he commits to seduce her into falling in love with him and then he will embarrassingly reject her in a very public display to exact vengeance against his former tormentor. Ah, but there the kernel of doubt. Perhaps, beneath the surface, where things are rarely revealed, therein lies a deeper relationship between the two.

Well, Adagaki has grown more emotionally abusive and verbally inconsiderate, so Masamune decides that the time is ripe for her to be taken down the entire pegboard. However, his scheme may become undone when Adagaki’s maid, servant, whipping girl Yoshino Koiwai (far left, lugging suitcase) tumbles to the deception. But she is willing to help in all of this IF Masamune will do just one thing: follow her directions completely, without hesitation or doubt.

The series is the great length that these two ‘brothers in arms’ go through to make the “Cruel Princess” (Adagaki’s nickname) crash and burn. Or is it?

Despite what Yoshino says, her actions belie her words, as if there is another hidden agenda. We are treated to numerous flashbacks to the day when Masamune was rejected, as this serves as the touchstone to push himself harder. I mean, every other girl in the school fairly swoons when he passes by. Quick! Get the fainting couch and the smelling salts! But his eyes are on the prize of the Cruel Princess. Oh, how great that dish will be when he makes her fall in love with him and then…..dumps her like yesterday’s trash!

I found myself drawn to this show, even though it has elements of “Nisekoi” (as I mentioned), but it is handled in a better sense, for we all want Adagaki to fall into a heaving pile of sobbing girl. The fear of discovery and his best laid schemes of mice and men could gang aft agley put a better edge on it. But you can’t shake that nagging feeling that you are not getting the whole store here. I feel certain revelations are being withheld from us, which would spur on the second season where, we hope, a price is exacted for these atrocities inflicted upon his person. I don’t want to say more, as I could have tumbled to something, so I will allow you to draw your own conclusions.

This is a strong candidate for binging, as the machinations play out far better than a day-to-day approach and it does play up the tension over fear of ultimate discovery and potential failure of the deed.

And remember, it’s first run until you’ve seen it. It’s “Dead or Love”.