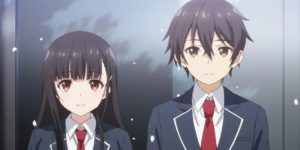 Romantic comedies are hard to pull off effectively, in that the combatants (for wont of a better term) need to be smart enough to understand why they do what they do, but just clueless enough to allow the events to unfold as they need to for the story to be told. It doesn’t always work, as when other parts are brought into the mix that may or may not complicate things, and that is how we get to “My Stepmom’s Daughter Is My Ex” (“Mamahaha no Tsurego ga Motokano datta, or “My Stepmom’s Daughter Is My Ex-Girlfriend”).

Way back in their youth, when they were middle schoolers, Yume Ayai Irido (her) and Mizuto Irido (him) were a thing. They would flirt and argue and get together and break up again and again. However, when it was time to go into high school, they felt it was better to part ways fully and lead their own lives. But a complication occurred. Yuni (Yume’s mom) decided to marry Mineaki (Mizuto’s dad), oblivious to the fact that they dated, although it felt more like they ‘dated’; you know, hung out together rather than anything more romantic.

Thrust back together, they try to make the most of a bad situation, doing it for the parents, so they have to act like brother and sister. If that wasn’t bad enough, they were born on the same day, so who is going to be the ‘older’ sibling, which sets the course for things.

The biggest problem with this show is that it doesn’t know what it wants to be. It’s not funny enough to be a comedy of errors, it’s not dramatic enough to be a real tug of war of power and supremacy. It comes off more like a true sibling rivalry, with a poor game of one-upmanship being played. There is still too much animosity between them (the reasons are vague and certainly clouded by their personal feelings, which they are still nursing) which prevents them from coming to a more hospitable conclusion.

They cannot let these feelings lie fallow. Each has to prove to the other (and potentially to themselves) that they were the better partner in all of this, when the truth is neither were, and they were too young to fully understand things as complicated as romance, adult love and genuine commitment to the other. Under normal circumstances, this should be hilarious, but some caliber of chemistry or even writing is lacking, so it comes off as tepid.

As to binging, it’s a mixed bag. On the one hand, you see how their rivalry plays out, with the cat-and-mouse approach to besting the other in fair and unfair combat. On the other hand, it gets tiresome, as they are not learning anything, especially how to let it go. I leave it to your decision, but this is a double vote against. For me, not worth binging, as it’s not really worth watching.

And remember, it’s first run until you’ve seen it. I am the elder child.