Short Pull Series XXII – I’ve Got My Eye on You 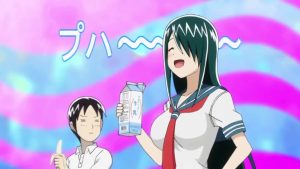 One thing about a majority of the short-pull series that I see is that many of them are based from 4-koma strips and, boy howdy, does it show! It’s not much more than set-up, joke, punch line, we all have a good laugh and that’s the end of the episode. Next! It almost seems more trouble than it is worth, but these shows can also be quite enjoyable. I tend to think of them as a proving ground for future writers and directors to test the waters without investing a whole lot into it, especially if it tanks.

This one is “Cyclops Shōjo Saipu”, (“Cyclops Girl Saipu!”) and focuses on the adventures of the middle school girl, Fuuka Saitou. She is nicknamed “Saipu”, which is short for ‘saikuropusu’ or ‘cyclops’. This is due to her height (she’s around six feet tall, big in any culture, but enormous to the Japanese) and her hair style, which only shows one of her eyes.

The shows revolve around her being helpful to her middle school classmates (yup, she be a mere 14). That person glaring at her is her older (19) and shorter (5-foot-3) brother, Hikaru Saitou. Two years previous (when our maiden was just a mere slip of a girl), she promised Hikaru that when she grew up, she’d marry him, so there is a strong brother complex, which is played for laughs, along with all of the other ‘misunderstandings’ that are a requirement for this kind of show.

Sure, there is a high perversity factor, as evidenced by the splash panel above, but it is done good-naturedly, so you never feel that it is grandly perverted, just normal hormonal hi-jinks. The only real problem is that the episodes are really too brief, so we do not advance too far with character development or overall story arcs. But if you want to have a good time over the course of an evening, this show will certainly fill the bill. As to more adventures, well, we’ll just have to see…despite as to how brief the episodes are!

And remember, it’s first run until you’ve seen it. Saipu!