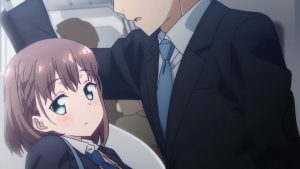 This is an odd series on a variety of levels. I feel that they could have done fuller episodes of this and really explored the unusual relationship between these two people. Or perhaps they wanted it that episodic, as their encounters are that episodic. In any case, “Tawawa on Monday” (“Getsuyōbi no Tawawa”) explores a caliber of casual meetings and greetings in the same vein as “Same Time, Next Year”.

The stories (actually, almost single incidents) revolve around Ai Tawawa and ‘Onii-chan’. He is also known as ‘Salaryman’, but doesn’t have a real name. Yup, that’s the two of them up there. She is called “Ai-chan”, as a pun, as her bust size is an “I” cup. Well, when you are that large, that young, that nubile, the subway ride becomes a groper’s paradise. After seeing Ai get threatened, Salaryman steps in to protect her and this caliber of friendship blossoms. But they only meet on Mondays. They have slight conversations and she gives him a present when they meet, which is usually a button that has popped free from her blouse.

Although we do see them away from each other, both lead rather drab lives. Salaryman is berated, as he is not meeting quotas. Ai is down because things aren’t going well for her, but they perk up when they encounter each other.

At 4-plus minutes an episode, there is barely enough time to set up a situation and cash in on it. I feel they could have done more, but maybe they felt that if it got too prolix (OK, talky), they would lose the audience that only wants to ogle Ai’s assets. There are also two OVAs (Really? Why not just append and make it a 14-series run?) that explore things a tad deeper, but you know that this is not going to be anything more that and older brother-younger sister protective situation.

It’s not a bad series, but I am uncertain as to what they may have really wanted to go with this. Should he be more protective and, through her bubbly attitude, gain some insight into how to be happy in a down situation? Did they think about ‘crossing the barrier’ and make the relationship a bit more intimate and personal? Will she graduate and head off to college and they never see each other again? These are all good plot ideas that were bumped into and potentially groped, but with not much more that a vague notion.

The series works best chained, as you get a better understanding as to the overall dynamic of what they are all about, but I feel it is more about missed opportunities, both on what it is they genuinely wanted and what I was expecting as a member of the watching audience. Maybe I’ll take the bus next time.

And remember, it’s first run until you’ve seen it. I’ll be here for you.